A happy ending for the Bullfinch family 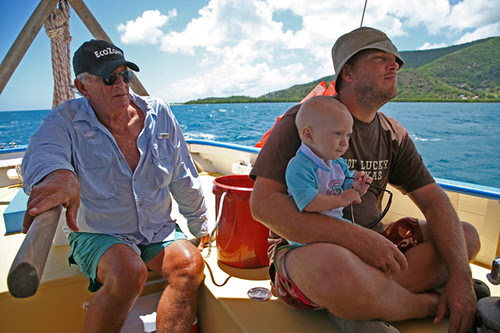 Before sailing down to the BVI on Ocean Nomad recently I took some of my family out day sailing for fathers day. Blogged here what I didn't mention was the story about the bird's nest. When we were pulling out of Jolly Harbour i noticed a small nest tucked up under the boom below the sail cover and deep into the sail. There are so many birds constantly trying to make nests all over the place in Antigua during the spring months just like most places around the world and we had already had a few try to make nests in and around the house. I took a quick peak as we motored out between the channel markers and found that the now mobile nest had three small eggs inside it. Since we left kinda later we motor sailed using just the head sail up to Cades Bay. In the afternoon we knew that something had to be done about the nest and little eggs as we would be sailing properly outside the reef and back to Jolly Harbour. I carefully picked it from between the folds of the mainsail and placed it into a bucket which we stored below for the sail home. None of us knew if the nest had been abandoned long before as the boat hadn't been sailing for about 2 weeks. We just figured it was silly to abandon hope of saving the little birds. My family is like that when it comes to animals and there are countless other rescue stories about birds, dogs, cats, horses, goats, turtles, whales, dolphins and others that i could mention. 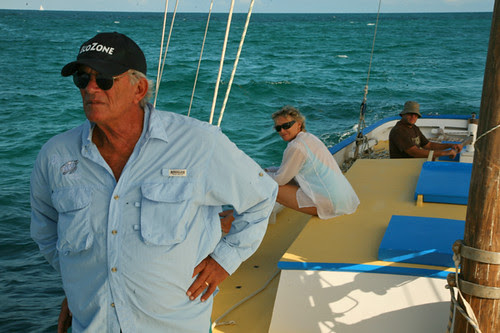 The sail home as i mentioned in the other blog was lovely and we forgot about the nest as we spotted huge green turtles on the sail home. I think we counted 30 big greens. 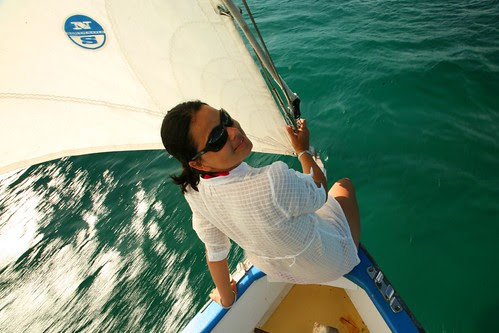 There is a special spot where we see them on every trip. Anyway as soon as we pulled on to the dock where we keep the boat two bullfinches appeared reminding us about the little nest. The chirped desperately looking to see what we had done to their nest. My bro (the new father) Ali, went below and got the nest out of the bucket and grabbed a bit of green net which Mykl had been decorating our outside light with. He cupped the nest inside the net and hung it in the back of the furled main below the boom. The birds kept trying to get in there but didn't seem to be able to make it. Ali moved it more out into the open and the birds could see it but didn't get in. The next morning when Jason came to work on the sloop i told him about the birds and told him to keep an eye open for them. Neither of us saw the birds actually enter the nest but they were buzzing around and still interested in it. I was losing hope about this nest and with our plan to set sail in four days on a 200 mile trip across the ocean to the British Virgin Islands, the prognosis wasn't good. At the end of the day i caught a glimpse of the bullfinches alternately entering the nest and figured it was a good time to move it off the boat. When i went to remove it from the sail i notice that a tiny inch long pink thing with one feather had hatched out inside the nest and with amazement i let out a surprised laugh. On the wooden deck i had an old rusting BBQ and figured I would hang the netted nest off of it somehow. With the birds chirping and watching from the neighbors balcony i tucked it behind the bbq hanging it in a way the feathered parents could see it and get in if they still wanted to. The boat was going sailing and there was no other way. The next morning I had a quick peak and noticed another almost lifeless chick in there. I still wasn't sure about their chances.
On Friday, we set sail for St. Martin where we would pick up some stocks for our two week trip before doing another 90+ mile sail.
After about 500 miles of sailing and motoring I arrived back in Antigua to find out the good news. Mykl who had flown home a few days before told me that two big chicks had been making a hell of a noise chirping and that they were full of life. I guess the third egg never made it, but i was pleased to hear about the two others. I went to have a look and smiled when i found an empty nest. They had already left the nest. While cleaning out the sloop i caught a glimpse of the mother bird having a bath on one of our coolers. It had just rained and i quickly got the camera out to shoot a few snaps. 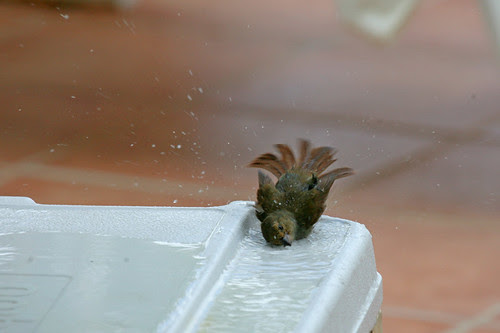 She had a good bath before flying off to make more noise next door. 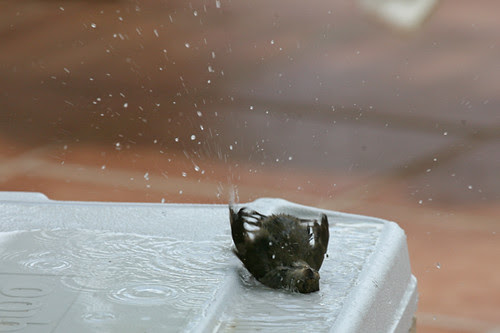 I know this blog seems like plenty of words for not much of a story but it made me smile thinking about it. I haven't told my family yet and am sure they will get a smile out of it too. Out sailing that day, we didn't think the little eggs had a chance.
www.adventureantigua.com
Posted by 365 at 12:00 pm 4 comments: