People often have to think long and hard about their kid’s birthday parties as it can be quite a stressful ordeal. Not for Laila Hadeed though. Laila and I were in class together in grade 6 and she called on me recently to see if we could do an "alternative" party for her daughter Rax. As you can see it was a great adventure in the North Sound and we all had loads of fun. It was then Justin's turn to have his birthday party and we went a little further up to Green Island. Again we all had an awesome time. We did another party since then for some of their friends but this past weekend it was time for Laila and Basem's youngest...Omar. Omar wanted to do something a little different and also wanted to do some fishing. 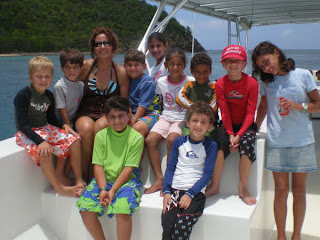 We went south this time stopping first to look at turtles outside of Carlisle Bay Hotel. It was then time for X-Scream "tubing" on the inside part of the bay. 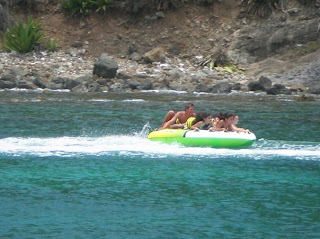 Ross was the first to fall off which ignited screams of laughter from the whole gang. The crew shouldn’t fall off I know, but we are speaking about Ross (happy birthday today Ross).
After a bunch more screaming it was time for some adventure on a beach. We went up the coast a little to Rendezvous Bay where the kids swam while we set up lunch. 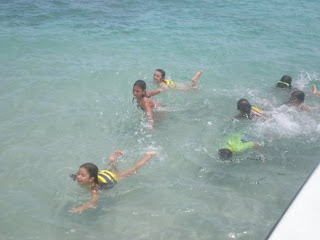 Before lunch I took them for a walk down the beach to examine the older turtle nests and to look for some more. There hadn't been any fresh ones since earlier in the week. We are in Hawksbill turtle nesting season now. Anyway, after a huge huge lunch it was time for roasted marshmallows which is one thing that all the parties seem to have in common. It’s a must for these kids. In the middle of roasting marshmallows I heard screaming and looked up to see kids running in every direction. Ross and Tony who were managing the fire told me that two little scorpions tried to escape from inside the burning wood. They didn't make it though and were roasted too. It was now time to cruise down the coast towards our X-scream tube and the little boat we had left in Carlisle Bay. On the way we broke out the fishing rods as I knew Omar was slightly obsessed with fishing. I understood his passion. We trolled down to Carlisle Bay. Tony was driving, Wan Lovv was organizing drinks, Ross was taking care of the rod on the port side and I was holding the starboard rod. Ross and I each argued about who would be the first one to catch a fish and in the end when we were close to Carlisle Bay Ross hooked up. We were using small spinning reels with 12 pound test line. There wasn't much on the reel and before Tony had a chance to slow down almost all the line was gone. 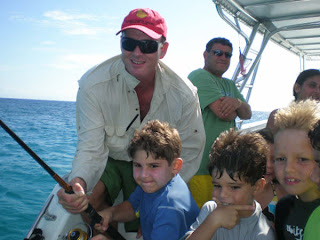 Omar was quickly set up with the Rod and as quickly was in perfect rhythm fighting the beast. The screams and shouts from all the other kids was almost deafening and the yellowtail jack fought like all the jack family fish.....hard. 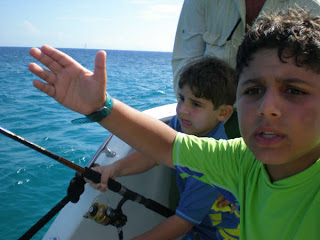 The job or bringing in that fish would have been tough for anyone and little Omar on his birthday fought that fish like a big man would have done. The determination was incredible and his little bursts of "I am gonna show you" made it even more exciting to watch. I am sure that any other kid his age would have given up as the jack fought so hard, but not Omar...not in front of all his friends... not on his birthday part. No way! 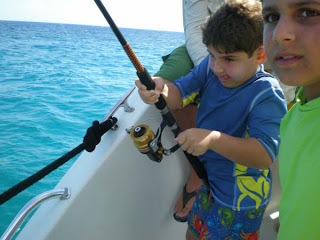 The fish finally came to the boat, but it wasn't over and with a few sharp bursts of power the fish took out the line again. Omar didn't bat an eyelid and kept on fighting. I think I am going to want him as our junior in fishing tournaments to come. I finally had the fish in my grip and carefully took the hook out and showed the guys the fish before releasing it to fight another day. 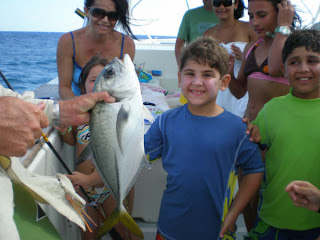 Wan Lovv groaned as the fish hit the water. I think he had thoughts of it in a pan later that night. No chance. 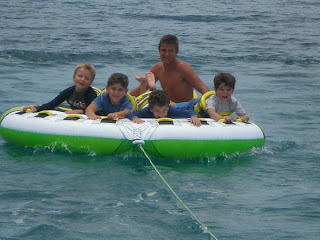 We just had enough time for a few more runs with X-Scream and it was then time to cut the amazing cake. 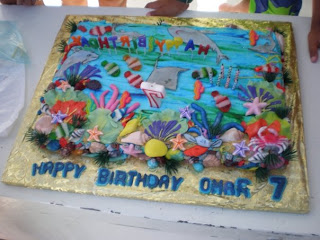 All in all it was another fantastic trip out on the boat for a custom tailor made birthday party. I wish I was still seven years old.
Posted by 365 at 9:30 am 1 comment: