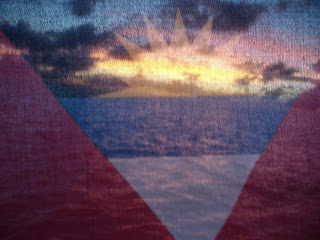 November 1st is a very significant Day for Antiguans and Barbudan’s because it signifies the day that 'we’ broke away from British colonial rule. On that momentous day in 1981 the people of Antigua and Barbuda made the decision to chart their destiny as an independent nation.

Over the past twenty-six years, Antiguans have come together to celebrate annually, our cultural identity, our past and ancestors, but more importantly, our freedom.

Among this years Independence offerings was a Food Fair, in which a variety of culinary customs and traditions were demonstrated, showing how to make traditional local dishes, like the chatta dumpling, or bamboola.

There was also the fourth Annual Homecoming Queen Pageant, in which twenty young ladies from Antigua and five from Barbuda were selected to compete for the coveted title, now held by Sybil Ramrattan, the new 2007 Independence Homecoming Queen. 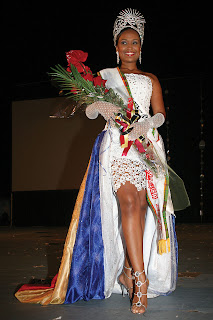 There was a Calypso and Awards Night, held at the Royal Antiguan Hotel which saw Leston “Young Destroyer” Jacobs, take home the award for Calypso of the Year and as well as one for Best Social Commentary. Calypso has been a powerful vehicle in Antigua and the West Indies, conveying the thoughts of local storytellers for the past century.

In fact, the year 1956 saw the Mighty Sparrow burst onto the scene taking the calypso world by storm with his legendary hit Jean and Dinah. Jean and Dinah, which celebrated the departure of US troops from Trinidad, ushered in a new era of politically charged calypso.
Having done some research, by most accounts, this politicized form of calypso helped facilitate Trinidad's independence from Britain in 1962. It is safe to say that socially and politically conscious calypso has had a major influence on many of Antigua and Barbuda’s social and political movements as well.

Despite the excitement of all these activities, I have to admit that for the most part, I observered from afar. I had two days off this week and nothing was going to stop me from taking advantage of the wind, by going for a kite surf!

After months of no wind, finally it was a steady 20knots. While people celebrated their Independence parading around town, a few of us celebrated with an afternoon session at Green Island. Stoked! 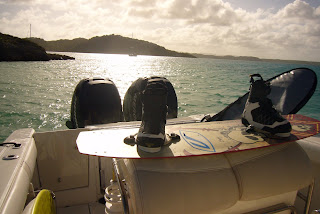 Annabel Fuller
Posted by Pura Vida at 4:49 pm No comments: