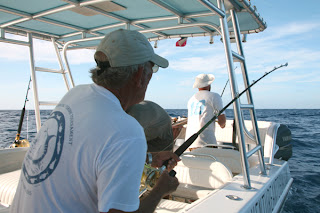 During dinner the night before, my uncle Jim had challenged the team members of Adventure Antigua - Xtreme to a fishing competition the next morning. He said that fishing times were to be between 8 and 12 in the morning and that we had to be back at the beach no later than 12:30 pm. He had Alan and his son Ian as well as Stevie on board and on our boat it was Big John, Anthony, my bro Ali and my Dad. We left together slowly winding out though the reef into the Atlantic. From there we raced ahead looking for birds which we found very quickly. By the time Jim caught up with us we had a mahi mahi on the line which unfortunately freed itself shortly afterwards. We watched as Jim hooked into and landed two fish. We could see the mahi chasing flying fish out of the water while the frigates tried to catch them in mid air and we continued to follow them all in the hopes of hooking up. We made a few mistakes with out baits and saw Jim hook up again. Since the day before we had seen birds all along the coast we made an even bigger mistake by deciding to go to look for them. We traveled for miles and miles looking for frigate birds which are the signals for mahi mahi proximity and to our dismay we found none until about 11 am. I spotted a massive flock of them way offshore in the distance and we headed out to intercept with hopes of catching the mother load. On our way out to them we hooked up with a mahi of about 30 lbs and finally landed our first fish. We were sure that once we got to the frigate birds the fish box would fill up, but once we got there we could see that the fish under the birds were not actually mahi, but were all small tunas instead. These little skip jack tunas were jumping and chasing their prey to the surface where the frigate birds could feed from them too. No mahi though and we finally realized that Jim was going to slaughter us....
There was one thing that could save us though and that was the very time rule that he had been so adamant about. "Be back by 12:30 pm" he had said. We were zooming down outside the barrier reef and could see him way behind us doing the same thing. I was sure that he'd be too late once we got inside the reef and had to slow down. Sure enough we arrived back in at 12:26 which was confirmed by his wife, Mossy. Jim arrived back 10 minutes later to be officially DSQ'd making us the winners on a technicality. This didn't make any of us feel better when we watched him and his gloating crew off load 9 mahi mahi. Ruben who owned the base camp was delighted with all the fish which he will use in a big fish fry later this month. For now it’s filleted and stored in the freezer at his place. Ours was prepared for more fish dinners at the camp. 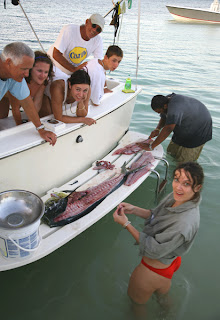 After a quick lunch and a short rest we set off with the girls and other youngsters on a snorkeling adventure further up the barrier reef. On the way we came across several surfing dolphins which seemed very uninterested in our boat as we passed by. We tucked into a tight spot outside the reef close to the place we had been the day before. The snorkeling was not bad, but we had never been there before and unfortunately didn't match up with our expectations. After the terrible category 5 hurricane had made a direct hit there in 1995 much of the reef had been destroyed and the influx of illegal fishing by Guadeloupian and Dominican fishermen has taken its toll. I guess I am just comparing it to how I remember it from before 1995 and although it’s still beautiful and interesting it’s not as good as it was back then. At this time of the year I am always looking out to sea whenever I can in the hopes of seeing whales. I have seen several but hadn't seen any up until then. While the rest of the snorkelers were still boarding I was lucky enough to see a whale spout just outside the reef. It appeared to be within a mile of us and once all souls were back on board we ventured outside the reef to look for them. Of course we were going very slowly while we looked for the whales which gave Big John and the other guys time to put out a rod. Almost immediately we hooked up to another Mahi and surprisingly it was only in about 80 feet of water. Usually these fish are in deeper waters. Anyway, we boated it and shortly afterwards met up with the whales. It was a massive momma and her tiny calf playing in about 100 feet of water. There were about 12 of us on board and many had never seen whales before, so it was extra special getting so close to these amazing creatures. The calf seemed intrigued with us and kept trying to get close, but the mom was more cautious and always seemed to keep a safe distance for them both. I would estimate the calf to be less than 15 feet long and fantastically cute. The momma surfaced to spout and show the tell tale humpback about 50 feet from us. She was enormous and was probably about 18 feet wide. Her back was ever so dark and smooth looking. Anthony and I jumped in with our snorkeling gear expecting them to come closer, but unfortunately we never got close enough to see them.
Back at the base camp later that night we had a massive seafood dinner with "fish water" stew and fungi as well as a lovely dish of seasoned fried fish. The fish was so fresh and tasty that we all ate too much. IT wasn't easy to finish off the freshly made bread pudding either. 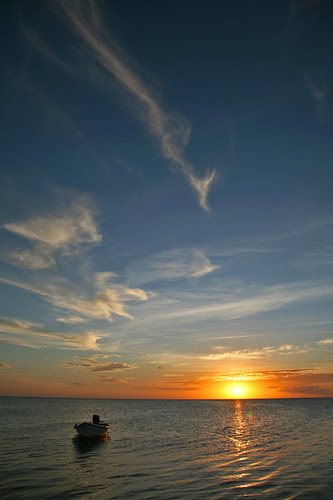 I was so tired and satisfied with the day and evening that I don't even remember falling asleep that night. What a lovely day it was...I didn't even think about the fact that it was our last full day there.
Posted by 365 at 11:49 am 1 comment: