a little practice run before the tournament

Of the two main Adventure Antigua boats, we usually use Xtreme for marlin fishing and tournaments as seen here (with the only marlin we have ever killed out of the many we have caught) 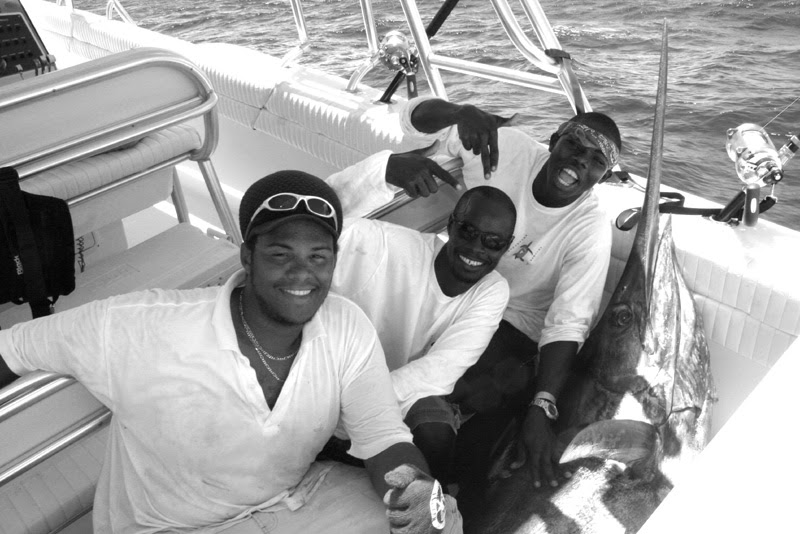 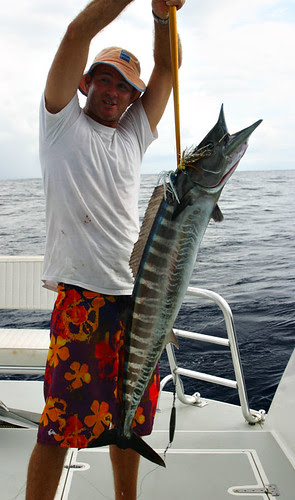 We usually do well and have placed in the top 5 in almost every tournament we have entered over the past 5 years with most of our finishes in the top 3. We keep missing the top spot by a few points and most boat skippers know that our boats do well in tournaments. Why do we do well? Well mostly because we fish for fun but also to win.... we are not just out there drinking booze and having a laugh. 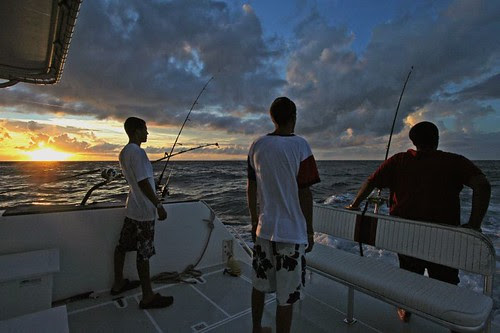 All of my crew are as competitive as i am and most often more so. Our gear is carefully managed and prepared before each tournament and we always go for practice runs. Someone the other night laughed and asked how was it possible to practice for fishing. To me it's the same as practicing for a yacht race. Your crew has to know the boat and its parts very well. The use of the gear has to be second nature in order to be fast and accurate. I have been on both sailing boats and fishing boats where the crew were anything but a team and the results showed. Just putting lines out can be a complex task. Neither of our boats have outriggers (large poles used to keep the lines spread out) and as a result we are more susceptible to tangles. With a good team tangles rarely occur and if they do the team spots it before the tangle gets bad. Usually the lines are back out within a minute or two ready for fishing again.

Anyway, for this tournament we are going to be doing things slightly differently because it's not a marlin tournament and we are using Xtreme.

Xtreme's depth recorder has been malfunctioning and to catch wahoo and tuna properly you need to know where the 100 fathom curve is accurately. Yesterday we installed one we borrowed from the Scarab and went out to test it. It was a practice day as well too since we were using gear that we don't normally use on Xtreme like planers. When we fish for marlin we run all the lines on the surface but when you target wahoo you need to run some lines deeper and the planer carries lines as deep as 40 feet below. Guilli, Tony and I left port with the idea that we would test our gear out on the drop off and make sure that we were going to be ok on Xtreme. Captain JD stayed behind to clean the bottom of the eco boat, and in exchange for that nasty job i am letting him use it in the tournament. Team Adventure Antigua will dominate :)

As we pulled out of port we knew that whatever happened it would be lovely out there. Montserrat looked like it was just off Jolly Beach and we could easily see St. Kitts, Redonda, Nevis and Guadeloupe. The dust had gone and the crisp clear skies were so beautiful and uplifting to behold. What was even better for us was that the seas were mirror calm making everything look almost unreal as glass calm seas usually do here. Guilli took the helm and cruised due west towards the edge while tony and i rigged the lures with tiny ballyhoo we just purchased from Aquasports. Tony joked that they looked more like sprat! 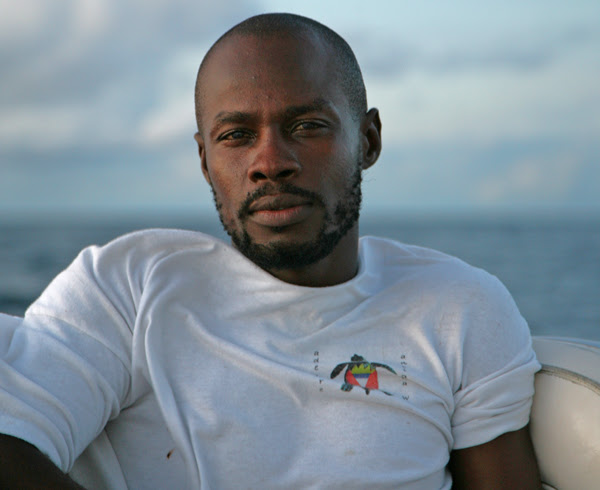 We had a little work to do on the planer while we ran down to the edge and by the time we had everything ready we were at the starting point just off Ariadne Shoals. It was so incredibly calm....
We carefully let out the planer as it has great potential to make a mess of all the lines. The planer we have is a stainless steel plate with a small lead weight that keeps the plate at a downward facing angle. As soon as it hits the water it dives deep and pulls hard. We attach a clip to it and send our fishing line down to it so that one lure can be fished way below the boat. There are loads of things that can go wrong so doing it right is imperative. Most people use other techniques to get their lines deep and most common is monel line which is where people use stainless steel wire instead of nylon. The steel line sinks as you troll it keeping your lure deep. The reels are very heavy and the line breaks if it gets old or gets kinked. I have lost many fish and many good lures on that type of line so i don't use it. Also, i like using the same set of rods for all my deep sea fishing. Our system is a bit tricky and you have to practice with it before you can feel comfortable using it. Hence the trip on Xtreme. Before long we had a strike on the "stumpy" (line closest to the boat) and the planer line down below. Guilli took one and i took the other. My one which was on the planer was a small black fin tuna and the other would have been a much larger one, but it was attacked by something big. All we got was half of the fish by the time Guilli got it to the boat. We trolled north as the winds picked up slightly and had several big bites on the famous Yozuri bonito lure. As famous as it is for getting wahoos to come after it, it's as famous for fishing being able to get off of it. I cant understand why so many fish are lost with the blasted lure, but the bites are frequent. We did get another huge strike on the stumpy again, but this time Guilli managed to get a nice wahoo to the boat. As so many boats including my Dad's had been out recently without catching anything we were happy to have gotten some action, and being out there in the lovely calm conditions was just gravy. After we decided to call it a day, both Tony and Guilli begged me to try a little bottom fishing. They both wanted some snapper to take home. We didn't have much luck at first and then just before we were going to reel in tony got a nice strike. We pulled up from about 4oo feet below to find two rock hinds like the one seen in this image. It was now time to cruise home and have some fish for dinner. 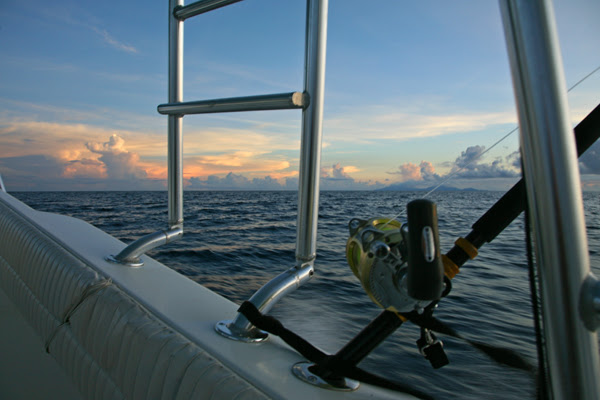 The cruise home was beautiful with the tops of some big clouds being lit up in the South and the sunset in the west. 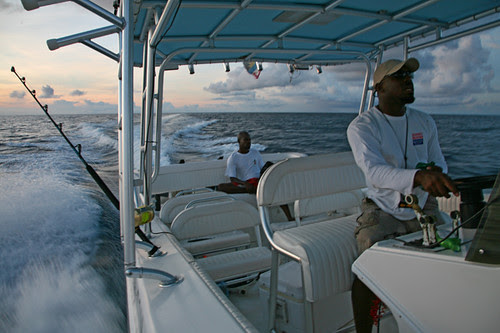 Dinner was as good for all of us and a few more. 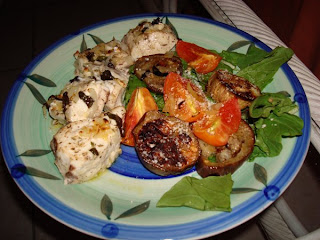 After i cut my share of the wahoo up Mykl made me a delicious and healthy meal. Fresh! If you have time, come down to the fishing tournament weigh in and the seafood festival this Saturday down at Catamaran Marina. Meet the Adventure Antigua crew there.
Posted by 365 at 8:56 am No comments: