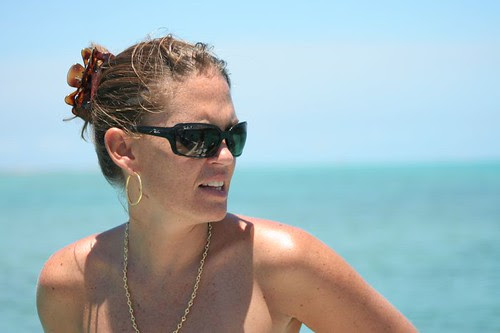 Nell Fuller is my younger sister and luckily has been working with me for several years now doing most of the behind the scenes stuff that you won't see while out on your tour. If it wasn't done though........we wouldn't be going out, so her job is one of the most important.
Nell had been working for an online casino which antigua is now famous in some circles for, and like many of her peers got fed up with that kind of work. At the time, i was short of someone to run the office side of things and Nell fit in well. Her job is not just office stuff though, although emails are a huge part of it. You can find her in the office replying to emails 5 days a week between 9 and mid day. Mondays she can be at it most of the day which is tough work. Another huge aspect of her job is keeping in very close contact with the hotel and tour reps. She is full of charisma which i think is her greatest asset. Recently I took her on as a small shareholder of my company. She cares about the company and gives 100% to make sure you don't have to think about what it took to take you on tour when you come out with us.
Recently she took a little time off to go another culinary course. She had done a cordon bleu course several years ago and has always been interested in Japanese cuisine, so this summer she set off for California to learn more. We have always enjoyed her sushi, but after 4 months of intense schooling she is now a master sushi chef and i can't wait to try some. She has returned now and is working with the company again. With this new skill, i am not sure how much longer she will stay with the company full time. If you make a booking you will be in contact with her. Say hi to "sweet fish" as they called her in Cali.
This pic is of her on a rare boat outing and for the record she is not topless!!!!!!

This other pic is of her on my other sister's birthday. Franny was 21 and nell was wishing she was........don't we all?