If you remember reading about the flooding in Omar you will remember that Jolly Harbour and Piggotts had some of the worst in very isolated areas that essentially ended up being huge drains. In Jolly Harbour we saw two helicopters get washed away from where they were anchored. We saw coolers, a boat and storage boxes a pig and a very large SUV all get washed into the sea. My company truck seen here 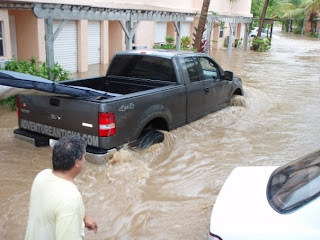 could only go so far and I couldn't get home for three hours. I didn't see Piggotts, but my cousin Annabel reporting for the Daily Observer managed to get some photos of the area while driving around. 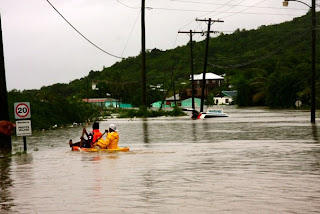 You can see from these images how badly flooded a section in that village got. 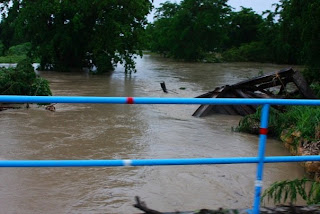 Judging from how much junk managed to get pushed into the sea in Jolly Harbour, I can only imagine how much got pushed into Fitches Creek and Parham during that storm. The topic of this blog is animal rescue and we are not talking about a fur seal or sea lion like the ones in this other blog. 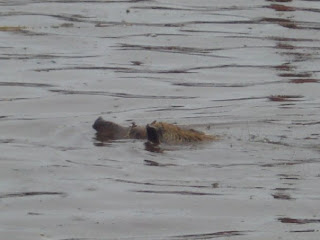 And other than what i have said about the pig in Jolly Harbour I can only add that my friend Dino managed to help get it out of the harbour using a kayak seen here. 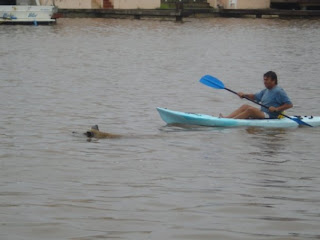 This blog is about a little dog.
Last week my good friend Stevie Mendes, who helped me bring the sloop from Carriacou last April, was out with a friend on a little boston whaler speed boat doing a little fishing and exploring. They came to a little island called Rat Island just outside Parham Harbour and for some strange reason they decided to go ashore. On it they found an extremely hungry dog that in my opinion had been there for 4 weeks slowly starving to death. Hurricane Omar missed Antigua but we managed to get flooding from one of the feeder bands that came off the storm. My theory is that in all the flooding loads of stuff got washed into the sea including this dog. Rat Island is just outside the bay where much of the Piggotts flooding poured into the sea at a place the old charts called Winthorps Foot Creek. The dog managed to swim to the island where it had been for four weeks hoping that one of the passing boats would pick it up. Stevie and Gareth were on a very small boat and decided to come back for it later with a bigger boat. They called Chris who works for me and asked him if he'd help them later. Chris had a bigger boat and went down to the area once the tours had finished to help. The got to the island in the dark and at first couldn't find the poor creature. With flash lights they finally managed to find her under a rocky ledge. Chris said the dog could hardly move and was afraid as well. They had brought some food and water and lured it to come out of its hiding place. Eventually Chris wrapped it in a towell he took along and put her in the boat. He told me he would be calling The Antigua Humane Society and PAWS the next morning so that they could take the dog. I thought that's what had happened, but found out today that Chris had decided to keep her. Guili is her name now and she couldn't be with a better person. That's the animal rescue story for today. Many animals in storms don't end up as lucky as this dog. These dogs were seen trying to find shelter after the storm in St. Johns. There always are a bunch of strays running around after storms. 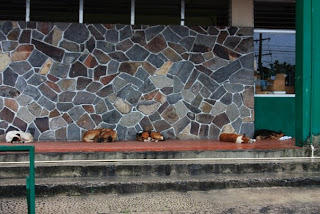 I understand that over 11,000 chickens perished in the storm here as well as several horses and quite a few pigs. Flooding seems to be the most deadly thing in storms and even though this was the second time in living memory that we have had such floods we need to be more prepared next time. I hope to have a photo of Chris with guili soon, but you can see Chris in this part of our crew's bio. Like i said in that section, Chris is always willing to go the extra mile to help someone or something.
(all the images here in today's blog were taken by Annabel Fuller except the pig ones which were taken by Lisa Reynolds)
Posted by 365 at 8:29 am No comments: