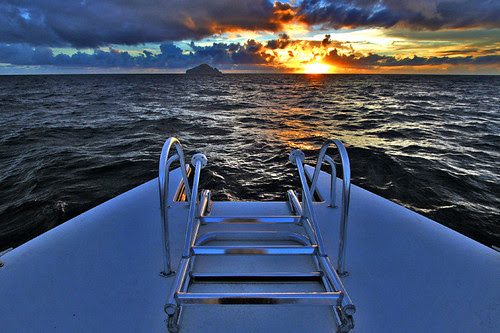 Some people often ask how i can be a supporter of sport fishing on one hand and a proponent of environmental and fisheries protection on the other. It's a good question and many people ponder this one. If you look on my flickr photos, you will see pics of me cleaning up the shore and trying to stop uncontrolled fishing on the reefs and then a pic of my boat with a dead tuna on it. 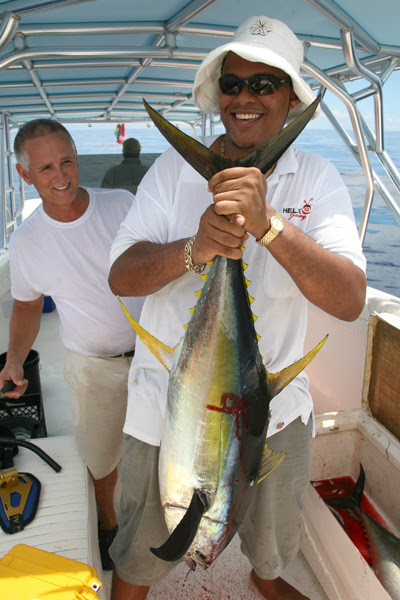 Why am i killing fish one day and wanting fish protected another. I agree this seems a bit strange but if you understand the specifics of the fishery as well as follow carefully what i am saying then you will see that i am not against fishing. What i am, is against uncontrolled fishing here in Antigua and Barbuda. Each year we learn more and more about the species which are targeted in our waters and many decisions and practices of informed fishermen change as the information comes in. Of course there are many fishermen who don't care at all about threatened species and keep targeting them. I have done almost every type of fishing there is during some time in my life as crew and on my own. I have spear fished, netted, long line fished, fish trapped, cast from shore, bottom fished, trolled, fly fished, used lobster snares, collected conch, cockles. You name it and i have done it, but in addition to all of that i have been very interested in learning about and keeping track of how these methods of fishing affect the fishery and environment as a whole. Some of the methods above target species with very specific catches and without much by catch. Other types as in the case of net or fish traps, there are a huge range of fish including many useless species (by catch) are caught. Learning about the different methods used here and others not yet adopted here, as well as the learning about the species caught has given me my own point of view. There are many species which have been over fished in my lifetime without hope of returning in any great numbers, and there are other species in the fishery which are being caught at higher rates than they can reproduce. I personally love eating fish, and think that catching and eating fish is part of my Caribbean culture. This doesn't mean that i go out there and catch whatever i see first. Targeting species that are not threatened and that can handle the type of fishing methods we use is something that i think makes a difference. Sustainable fishing is something that the Ministry of Fisheries has no clue about and because of extreme Japanese influence here, this probably wont change anytime soon. When i go deep sea fishing with my crew, we target mahi mahi (the species most able to withstand commercial fishing), wahoo, and some types of tuna. Most other fish that we catch are released including all bill fish. We kept one large marlin in a tournament once in my life, but have released all others. Tournaments have stringent rules about what fish are allowed to be kept and each year they seem to become more eco friendly and progressive with their rules and regulations. Conservation issues are usually brought up by people within the sport fishing circle and many if not all "rules" are self imposed. This isn't something unique to Antigua either as the recreational hunting and fishing sectors all over the world have pioneered conservation fights. Not only are these conservation issues brought up and discussed by sport fishing associations, but in many cases, it is these associations that bring conservation issues before the authorities eventually getting things changed. This past weekend we went to a one day fishing tournament over in our friendly neighbor island Montserrat. We used the Arawak Odyssey boat (seen here on another fishing trip). 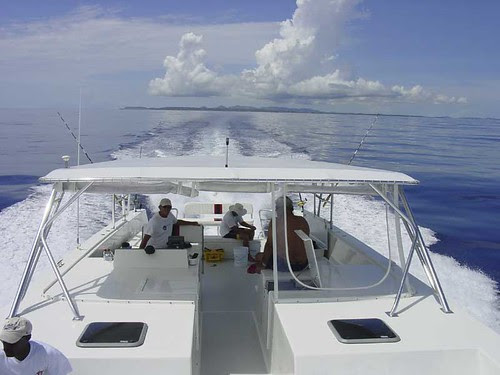 Like smugglers, we left Jolly Harbour at 3:00 am under the cover of darkness heading for Havers Shoal 38 miles away. We arrived just before lines were permitted to go over the side and there was glimmer of light showing in the East. Unfortunately, the winds were stronger than forecast and it was quite choppy. Our team consisted of yours truly, Tony, Ross (my cousin who is now working with Adventure Antigua), Big John, and Toby (who both fish with us regularly). This sea mount way out in the ocean usually produces some good catches and other boats started to appear before long. By the end of the day there were 5 boats who had five allowable fish each. This included our boat and we arrived in Little Bay, Montserrat to clear customs and immigration and then go to the weigh in. As it turned out, we didn't win overall, but enjoyed the hospitality. The poor island still has a massive volcano constantly erupting and keeping people all on one side of it. Anyway, nothing much happens there and the fishing tournament there was a big event. Goat Water which is their national dish was being given out to the crew and lots of alcohol was being consumed. It was quite a party, but we knew the rough seas out there would not permit us to relax properly until we got back to home port. As soon as we had our meals, we said our goodbyes and thank yous and set off together with "Nicole", my uncle's boat, towards Antigua. The seas were right on the nose and we let uncle Nick go ahead of us as the sun set over Redonda in the West. The waves were big and the spray was cold. We had 28 miles to go. I thought about doing the passage the opposite way back in 1984 on my windsurf board. Wow, feeling the spray against my face and the rough waves penetrating all the way up into my bad knee, i couldn't help feeling a million years older than i was back on that windsurf board at twelve.
Nevis fishing tournament is on October 13th.
Posted by 365 at 11:20 am 4 comments: