its not just whales that are being killed 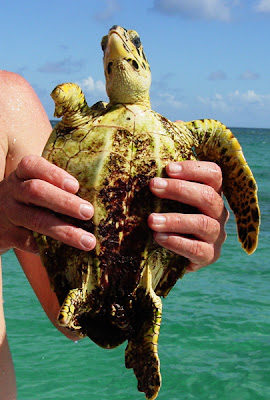 The topic yesterday raised quite a bit of interest, comments and emails, and I feel that more time needs to be spent on the issue of Antigua and Barbuda support for international whaling. More will come in the future, but there is another issue which is somewhat related. You see, Japan’s interest is not only for whaling and there are many who feel that whaling is just a tiny part of their own brand of “manifest destiny”. Japan is preparing for a much larger war I think which has to do with international protection of other species sometime in the future. Tuna which are increasingly being seen as a threatened species are an essential part of Japan’s culture. There are many other threatened or endangered species that Japan consumes and will fight to keep killing.
One such species is the Hawksbill Turtle. The photo above is of me holding a baby hawksbill that had been injured by predators. It was all healed up but missing most of its propulsion on one side. It is an incredibly endangered species which we speak about in great detail on our eco tour and which is protected by law in Antigua during the nesting season. In fact, that season begins now, and we are lucky enough to have one of the world’s best ongoing studies on them. Each year two scientist from the University of Georgia come to Antigua to study these amazing creatures over at Pasture Bay on Long Island just East of the airport. The study is co-sponsored by Jumby Bay which is a 5 star resort on Long Island. Click here for more info: http://www.jbhawksbillproject.org/ One of the most amazing statistics, and there are many, about these turtles is the fact that only 1 out of every 10,000 eggs that are buried by the momma turtles reaches maturity. A mature turtle is about 12 years old. Japan is the worlds largest consumer of Hawksbill turtle products and each year fights international protection of this species. How can our government align themselves with Japan when we use turtles in the marketing of our main economic product. We even have turtles on our passports!!!!! My sister Franny is doing her thesis on Turtle Conservation as i write this and is so incredibly upset and ashamed with the situation in our country.
Anyway, I will keep today’s blog short, but I hope that some of you can come up with interesting ideas on how to change our country’s position. On a closely related note….i am in tobago at the moment and am spending time with the Clovis family from the Kariwak resort. Tanya Clovis is part of the SOS group which helps to protect turtles here. Last night we had the unexpected pleasure of seeing a huge Leatherback turtle nesting on a beach here. She was probably about 500 lbs and it was just amazing seeing her do her thing. I didn’t get any good photos as taking flash photography can endanger the lives of these beautiful creatures in several ways. 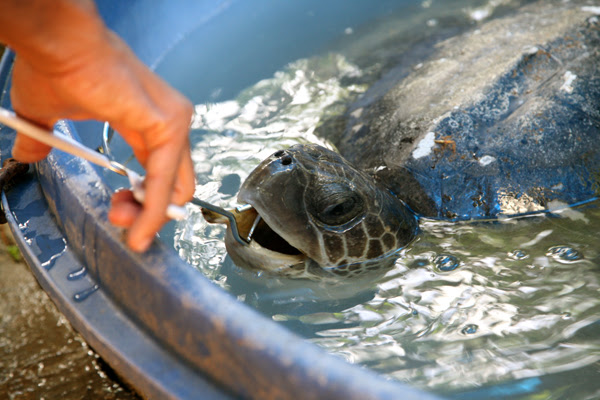 Tanya is also looking after a Olive Ridley turtle which appears to have been hit by a boat. Two days ago I had to help change her water and the photo I took here is of her eating her favorite meal. Jumbo shrimp! She is putting on incredible weight and today we are going to try to take her for a swim in the ocean. Hopefully she will be able to swim properly and more importantly dive on her own soon. All of these animals are killed each year as by catch in commercial fishing which is another reason Japan is extremely concerned with people or nations who think that protection of these animals is a necessity.
Posted by 365 at 2:30 pm 1 comment: