A barbuda trip having fun and looking for Suzie 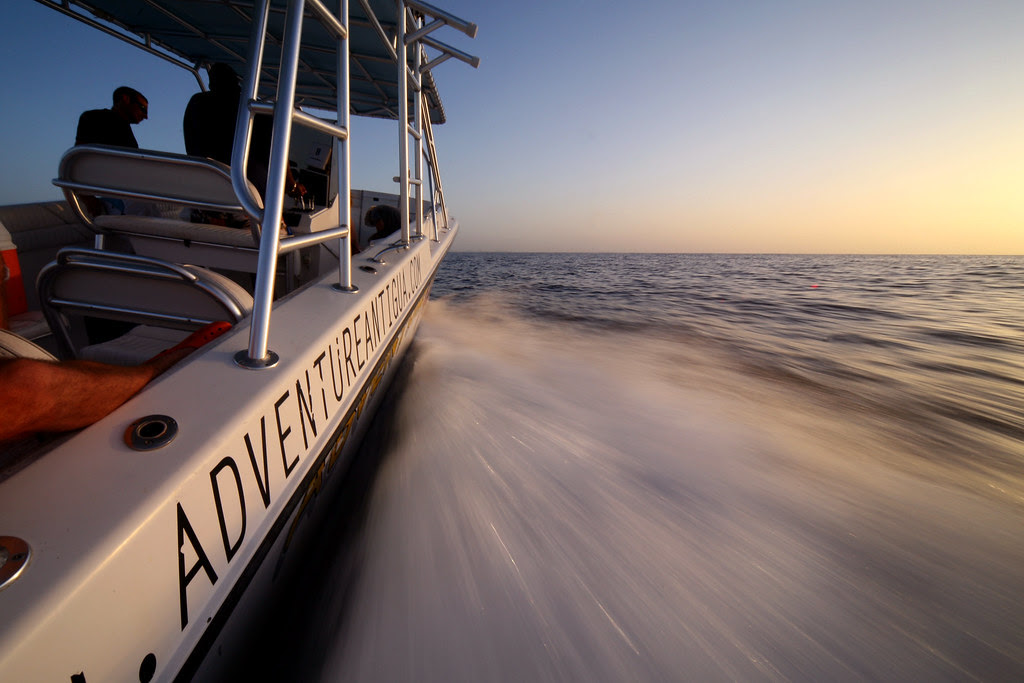 Yesterday some family and friends took off in this amazing weather we are having at the moment on a day trip to Barbuda. Whenever it's very calm on a Sunday we usually do something like this. Leaving Jolly Harbour pretty late didn't matter that much because we could go faster than normal in the calm seas over to Barbuda. From Jolly Harbour to the spot Susie the turtle had been pinpointed by the satellite tag transmitter on her back was about 34 miles. We were there in an hour and as we got close we spotted a very large green turtle just south of Palmetto Point on the South West of Barbuda. No blue GPS transmitter like the one seen of her in this link.
We slowly cruised around the area of the last GPS fix, but we knew that this position had been received almost 24 hours earlier and the chances of seeing her were slim. When we passed close to the beach we counted a bunch of very fresh turtle nests which all appeared to be smaller hawksbill nests. We then cruised up to another spot which we knew was a favorite Green turtle feeding area. They eat a special type of grass which is quite common in the shallow beds around Antigua and Barbuda usually in about 30 feet.

We saw a bunch of big adult greens there but no satellite transmitter. No doubt these turtles make huge passages to far off lands just as Suzie had done, and I imagined where these guys had been this summer. After another 30 minutes we went up more quickly to another foraging spot close to Coco Point Hotel where we could anchor for some lunch too. Here we saw more green turtles than we have seen in ages. They were popping up for air left and right. Greens seem to take only one breath before going right back down to eat more grass. The hawksbill turtles will usually stay longer on the surface before going down. It wasn't going to be easy to spot Suzie, but we had fun trying while eating our lunch. I snapped a few photos of greens as they came up for air, but i wasn't fast enough to get any good images. No suzie either.

After lunch we went to have some more productive fun beachcombing and snorkeling on the east coast. I love looking through the flotsam and jetsam out there on the windward beaches and i also counted two big green turtle nests and found some lovely shells. My bro who has hardly had a Sunday off in years was anxious to get in some snorkeling so before sunset we went out to the barrier reef and jumped in. Surprisingly we found some lobsters. I was surprised because there is so much over fishing in Barbuda that i didn't think we would see any. It isn't easy these days. Here is one saying cheese for us.

Big John and my bro were not happy to leave them, but we didn't come to catch anything but rather to take photos and explore. After managing to make it out into the Atlantic by passing through a channel in the breakers it felt like it was time to get back to the boat. On the way in we passed some rays which were feeding on the bottom. IT was some good snorkeling and a perfect end to our day on Barbuda. We had to hurry to get out of the tricky reef while i still had some light to navigate. Once outside the barrier reef the calm ride back was a dream. We hardly ever have it so calm, but September and October provide these days and we have to make the most of them. Today we received the latest GPS fix on Suzie and as you can see in this map (her track is in Blue and our track from yesterday is in Red),

she has moved up the coast towards Spanish Point. We would have crossed paths yesterday and i wish we had a more recent fix while we were over there. In the shallow waters off Spanish Point she would have been very easy to spot. Next time!