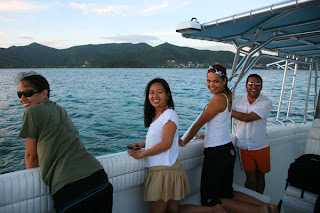 Some of our good friends were leaving yesterday so Saturday afternoon we went for a nice sunset cruise on Xtreme. We snorkeled at Cades reef as the sun set which was fantastic. 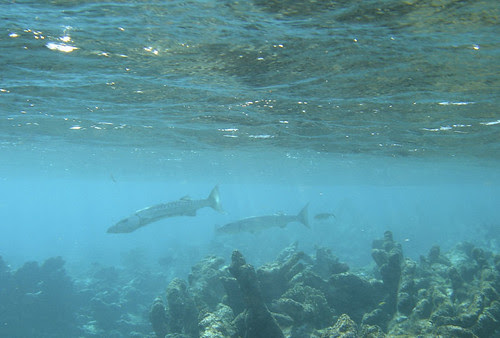 Saw a huge barri, a spotted eagle ray, a southern stingray, and a hawksbill turtle as well as all the other fishies you would expect on the reef. 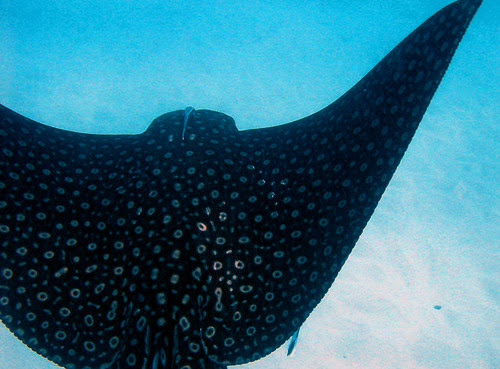 After the sun set many other fish that are normally hiding started to come out. We got back to the boat as it was getting dark which was kinda unusual and nice. My bad knee seemed to hurt more than usual this time though, but the pain was soon forgotten as Big John mixed some lovely rum and gingers up. A very fast boat passed us after it was dark going towards Guadeloupe without any lights on and we all came up with funny stories as to why he was in "stealth mode". The satellites were bright and we even saw a few shooting stars on the way up the coast. We decided to have dinner at Mad Mongoose in English Harbour. The food was great and we ended up getting into Jolly Harbour at 11 pm. Its not often we go boating at night, so it was a lovely experience.
Sunday was a quick Half Moon Bay session as the weather was just too good not to hit the beach for a swim. The water was almost as clear as the stunning blue sky and warmer than the air for sure. September can have some of the most beautiful clear days and bright nights of the year.... 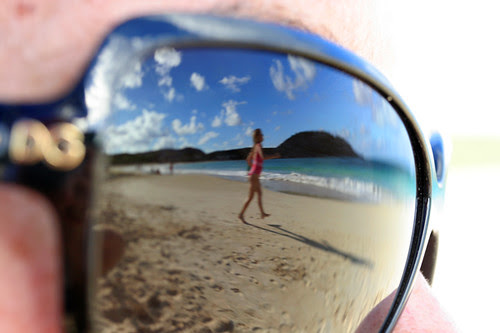 I finished writing that sentence at 8:19 am this morning when i had to rush out the door to help JD finish getting the eco tour ready for today's tour. I had put the title in too. Anyway, we had a little cloud mass over Guadeloupe 60 miles away which i looked at earlier in the morning on my trusty local area sat map, and it was moving west as a tropical wave. The day looked like it was going to be nice until about 9:30 am when it started to look a little darker in the south. I said bye to JD, Wan Lovv, and Chris and Tony and i started to do maintenance on the other boat. I had to go to the hardware store to get some paint and other supplies and noticed the black clouds in the South getting closer. I called my mom in the office to check on the satellite loops to see what was going on and while the rain started up she said the mass of clouds had shifted north and was coming our way. JD now at bird island called to say it was raining cats and dogs and needed some more info. The lightning and thunder started and we told him to abandon the tour. Of course nobody was charged anything and seemed to enjoy the rum punch JD had served before getting back in even if not the way the day turned out. That is the one thing about September....When its nice outside, it just can't be beaten, but when it rains it pours. Tomorrow looks good but i think we will have to monitor http://www.weatherunderground.com/tropical/ to see what happens with "invest 91" which is possibly coming our way in a couple of days.
Posted by 365 at 8:11 am