why would the government actively destroy a beach? 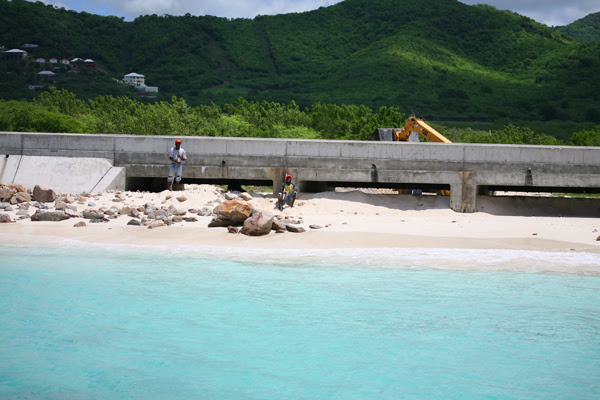 I am going to write this one as a letter in the hopes that either the Sun or Observer papers will carry it. If they would like to carry it and any of the photos (in high res) then they can call me on 725 7263:

Dear editor, i wrote a long entry this week in my http://www.antiguaisland.blogspot.com/ blog about how badly i think the UPP government is doing when it comes to maintaining our beaches which by the way are in terrible shape and getting worse. The five main government institutions that should have something to do with protecting our beaches are the ministry of environment, ministry of tourism, fisheries, public works, Development and Control Authority....... the problem is that each is filled with horrible red tape and just cant cooperate with each other working towards common goals which are best for the county. The health and therefore maintenance of our beaches is essential for our survival as a nation. Why the ALP and now the UPP cant see this is beyond understanding. Beaches all over the Caribbean have been made and or maintained using barbuda sand. Can you imagine that some islands which didn't have a nice beach now have a lovely one thanks to sand from our country yet we here have lost beach after beach with little or no consideration. To me, it is hard to understand how beaches are allowed to be destroyed. Some would have said that the ALP would have let anything in our country get destroyed without much care, but i am saddened to see that it is not a political thing. There is something wrong with all of our leaders past and present that they are ignoring beach maintenance and or destruction and in some cases as i will now describe that they are allowed to actively destroy a beach. 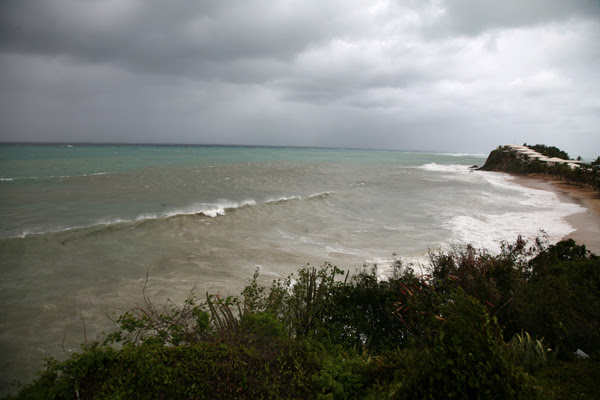 Each time there are big waves hitting our shores there are beaches that have problems. 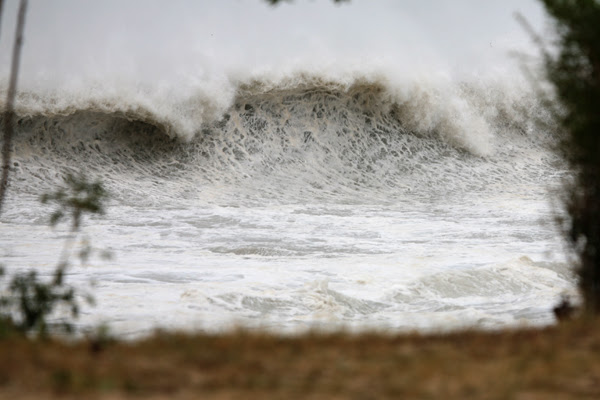 The barrier reefs are now lower as i describes in my last blog entry and more wave action and higher sea levels are washing sand up from the beach onto land behind the beach or even into ponds behind beaches. 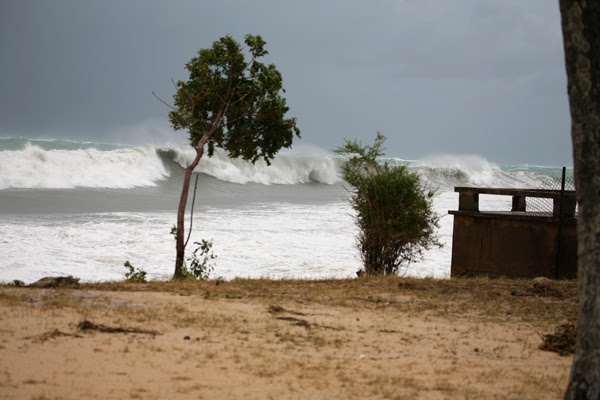 Since beaches are of critical importance to our nation one would assume that huge amounts of sand being removed from a shoreline would be a big deal. Instead, after all the storms the sand which is now no longer on beaches is removed by people. One of the main reasons OJ's beach bar is now OJ's rock bar is that the property owners up and down that beach have been removing sand after storms since Hugo. OJ can tell you how many truck loads of sand got taken away from the properties near him. A staggering amount of sand. If you read my previous blog entry then you would know why this sand isn't just replenishing itself. We haven't had any major beach event like this during the UPP administration until Hurricane Dean passed way to our south. Although we had little weather from Dean we did get massive waves pounding our south facing beaches for about 24 hours. Massive amounts of sand were pushed from the beach onto areas behind the beach in quite a few places. This happened to other beaches in the past but this time it was the south coast that was hit. Windward Beach was worst, with Rendezvous Bay being another, Johnsons Point beach (near OJs) another and Darkwood another where sand was pushed under the new bridge. The very next week sand started going missing in bucket loads from Windward Beach. I haven't been there since then so i am sure that it is worse. The property which is for sale on the road between OJ's and Blue Heron hotel had the sand that washed up onto it removed too. The worst however was and is Darkwood once again. Darkwood beach has had hundreds of truck loads of sand taken from it since Hurricane Hugo and all with the permission and in most cases with the management of the Public Works department. After once such storm the mining of sand was so severe from the swamp behind that to this day the swamp hasn't caught itself. The beach now has more rocks than ever and when you compare old photos or video the new Darkwood looks like a different beach. One would have thought that the UPP would have been wiser. After i noticed huge piles of sand washed under the bridge at Darkwood I immediately called the Ministry of Environment to uge them to push the sand back onto the beach. I was told that they have no jurisdiction over sand and couldn't do anything. They said that the only people who could touch the sand was Public Works. Public Works! Great! Sure enough, it was public works that once again started trucking this same sand away from Darkwood the next day. Click on the image for a larger version: 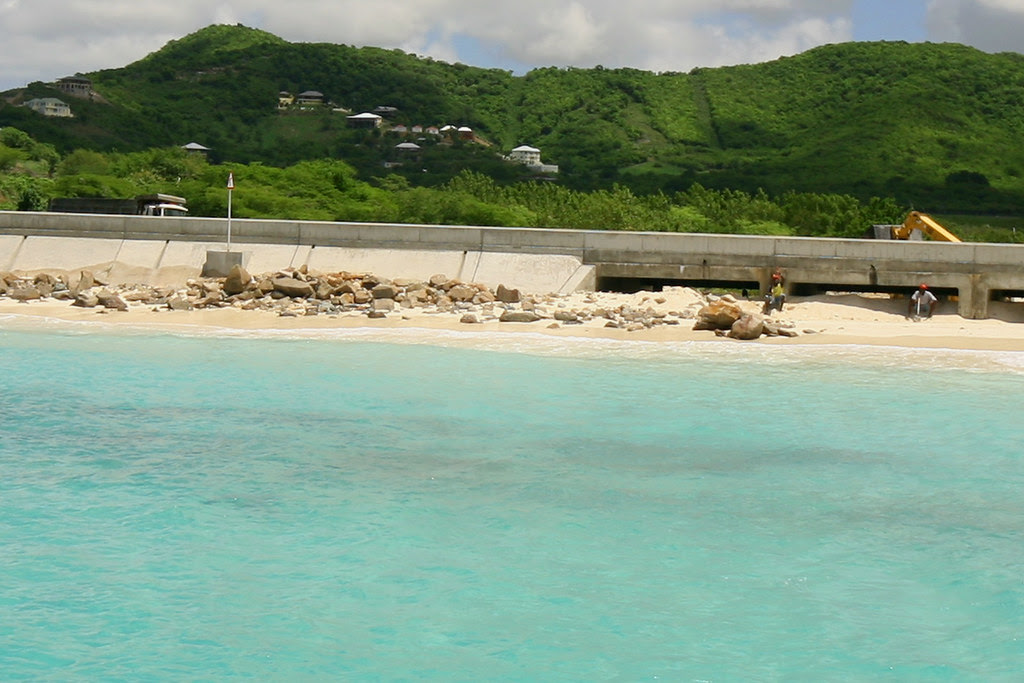 In fact they have been doing it for weeks since Dean. Look at this photo. You can Click on it to see the large version. Sand in any high tide or big swell will wash under the bridge (which by the way they try as hard as they can to keep unblocked by sand so that the sand can wash through easily) and once its off the beach then it can easily be trucked away. Why easily? Well easily because our nation and its leaders thinks that once sand is not on a beach then it can be moved away to be mixed with cement. Hard to fathom the mentality but i would like to take this opportunity to ask the Minister of Tourism Harold Lovell and the leader of the nation Prime Minister Baldwin Spencer a question. Why are you sitting by and allowing the destruction and mismanagement of the most important thing that we have in Antigua? I would think that as intelligent people, you can see that laws and policy need to be changed so that our beaches are better protected and managed. I can only think therefore that this whole issue has slipped you by. Please do something about it. My dad, John Fuller, told me that the Environment Division was incorrect by saying that they were helpless. According to him, the chief Environment Officer, in this case Diane Black Lane, has the authority to declare a situation where sand is washed off a beach during a storm, an "environmental disaster" and then have the authority to return the sand to the beach. No person or institution should be allowed to take sand of any amount from a beach in our country. If the UPP think that taking sand from Barbuda's mine is bad then they have to agree that taking sand from our beaches is worse and must be stopped.
Eli Fuller