"Be kind to your knees, you’ll miss them when they’re gone." 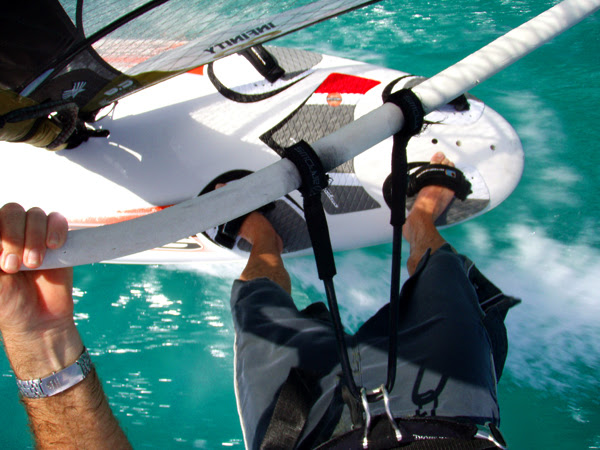 A song that i like to listen to every now and then is Baz Luhrmann's "Everybody's Free (To Wear Sunscreen)". So many things he says in the song like the title of this blog are true and things we should all think about. One of the things i didn't think about as a kid was the silly sunscreen. As you know from reading my blog on sunscreen, i think covering up as much is possible is better than putting it all over you. Anyway, one of the other things i didn't do was be good to my knees. In fact i wrecked one totally in kitesurfing fall. I used to love the extreme air we would get out there and after windsurfing all over the world, kitesurfing was such a cool new angle to the water sport addiction i had. 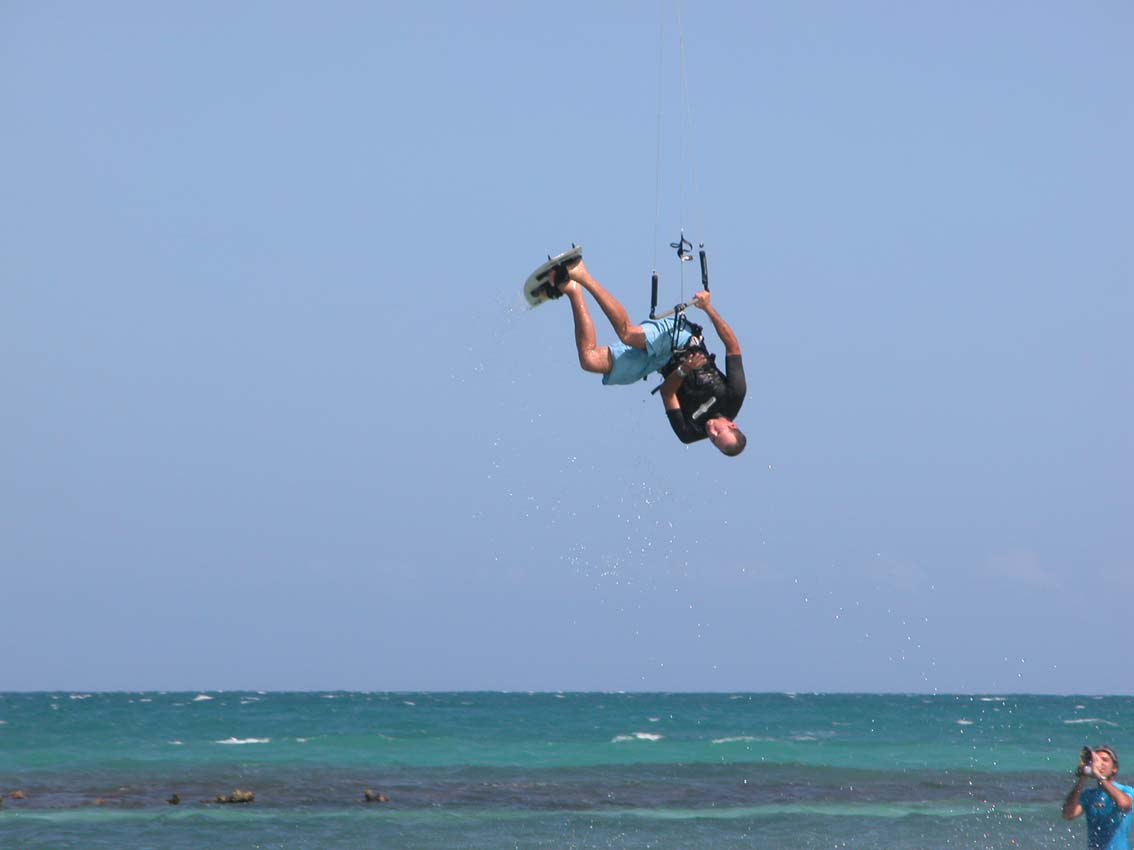 I knew it was dangerous and i had actually met two people who later were killed in kitesurfing accidents, but i thought i would be fine. I was wrong and as i landed badly from a big jump down at jabbawock, i immediately knew i had done something bad to my knee. I had fractured my tibia in the middle of the knee joint and crushed a section of tibia plateau. My life changed that day back in 2002 and has never been the same since then. I have had three major operations on my left knee and my doc has tried to help me get back on the water. The last time he opened me up the bones were all fine but the cartilage was in terrible shape. This shows the knees back in 2006. 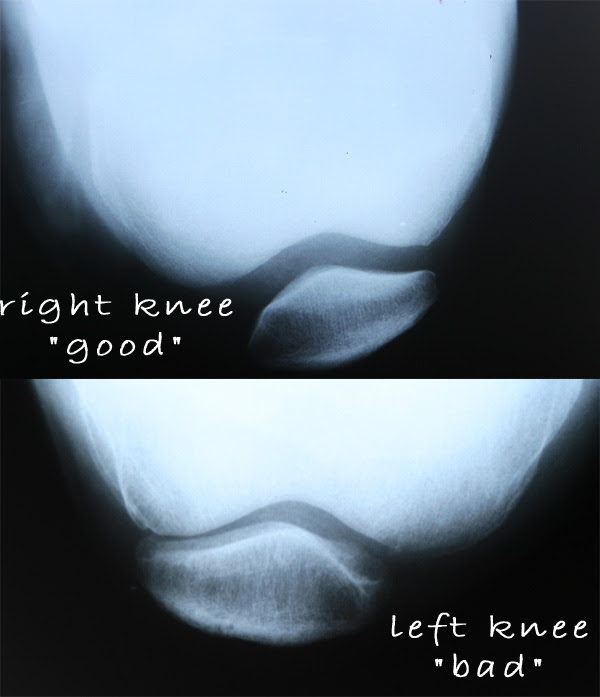 There was quite a bit of bone on bone rubbing and he urged me to not drive the boat as much as i had been doing. He told me that i would damage the cartilage in my knee even if i rode a bike. I already knew that driving the boat and just being on the boat was one of the most painful things that i did regularly, so it wasn't a big shock to me. It sucked though all the same, but i started taking some time off the regular driving. Since my accident in 2002 i have slowly stopped doing sporting activity more and more until this time last year i was doing no exercise at all. It was killing me. My mind was suffering more than anything else and i knew i had to get into some fun physical activity again. Several doctors in the USA and in the UK had looked at my scans and told me that if i was 50 then they would to a total knee replacement, but since i was so young i better just wait a while. This bugged me so much because it meant i had to be inactive until i was old enough to get my knee fixed (to be active again at 50)! Last may, after experiencing plenty of pain for a week or so during the fishing tournament, i decided to saw "what the heck", and go to a windsurfing event. HIHO held in the BVI had always been one of my favorite events and i had stayed away from competing in it because of my knee. WHY? Its just a little pain right? My knee wasn't going to get better anyway and the worst thing that could happen was that it would have to be fixed earlier than planned. I went and had a ball. I finished 1st overall and did have plenty of knee pain, but it wasn't so bad that i couldn't walk. It also didn't last more than a week or so which was cool. That all being said, i think over the next few months i noticed that knee pain was more quick to come and little things would sometimes give me plenty of trouble. Hurricane Dean came along and i couldn't resist the temptation to windsurf a little. It was extreme and extremely enjoyable, but as you can imagine the pain lasted another week. 3 hours of windsurfing and one week of bad pain. I had to find some other sport to keep my mind and body in shape. I am the kind of person that needs physical activity for my mind as much as for my body. I think that's the case with many people. What was going to be kind to my knees? My buddy Nik kept telling me about stand up paddle surfing or SUP. 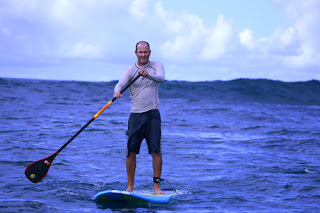 Essentially its a mix between canoeing and surfing using a big purpose built surfboard and a long paddle. You can cruise along exploring the coastline or you can go out to surf that is difficult to get to while normal surfing. I tried Nik's board a few times and enjoyed it so much that i was very excited about getting my own. This had to be better on my knees, so i ordered some gear from my friend Sean in Maui. After our two boards came in, my girlfriend and I went for a nice long cruise from Curtain Bluff Hotel to OJs. It was 4 miles downwind close to the reefs, flats and mangrove habitats of Cades Bay. We saw turtles, rays, permit and loads of other sea life and birds. I was loving it, but i did notice some pain in my knee. The next day my knee killed. If i couldn't do this then what could i do?
The next day i went to get some scans of my knee and sent them up to Mr. Justin Cobb in London. He's the one who has been working on my knee since 2002. As one of the world's leading Orthopaedic surgeons and a close family friend, i trust him with my life. Justin has just chaired a conference where 300 orthopaedic surgeons from around the world discussed knees and hips. He says that every year there are huge advances in technology and that there is a very good option for me. It looks like i may be in England within a few months to do some "relining" of my old knee. He says it wont be a total knee replacement, but more of a resurfacing or "relining" the ends of bones when cartilage has worn away and bone has been destroyed. Anyway, i am not sure when this will be and in the meantime i will be using my SUP in the afternoons. 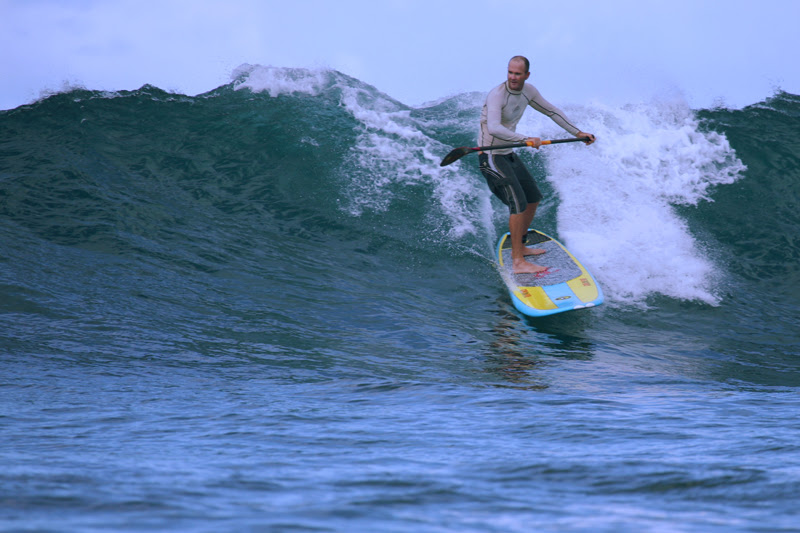 You look good on that wave!

The title of your post drew me in. For me it's shoulders and elbows (and hopefully nothing else) though none of my injuries were as severe as your knee.

Surgery(s) and physical therapy have done a lot for me...I wish you luck!