The final day of the sportfishing comp.

After we got back to the dock we were not in good spirits even though we had released two blue marlin and were currently in the lead. Earlier in the day, I told my crew that two blue marlin releases were no big achievement in a tournament and that we needed to do much better. Those words seemed to echo in our ears now that we were back at the dock after having the messup with the last marlin. Friends and family came down to the weigh in and we even had friends from the Antigua News Group who had come down all the way from the usa. (thanks for the photos). Although Tony did a great job of smiling, he was hurting inside and told me a few days later that our losing the marlin cost him two nights sleep. 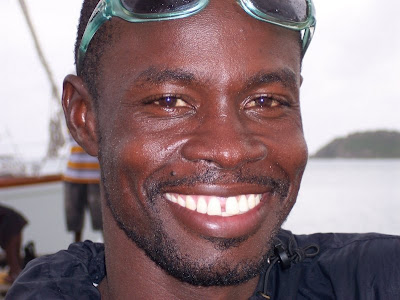 As you can see from Donna's photos, Tony did a better job of smiling than i did: 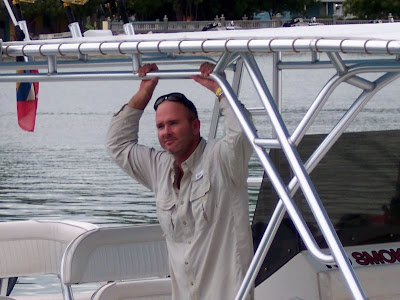 It was a lucky thing that the Antigua Sport Fishing Club organze a free bar for anglers because the rum seemed to help us forget the fish that we lost. There was an excellent side competition that night called the "cook off" where the fishing teams competed to prepare the best meals with ingredients and fish provided by the committee. There were something like 8 coal pots set up and each team had to light their coals and prepare the food. Judging the comp were several cheffs from Galley Bay hotel. We were first to get our coals white hot. In fact, there were guys still trying to get started when ours was ready to cook. We had to wait until the judges said we could cook. Guilli tried to redeem himself here and with the help of Tony and myself he did come up with the most beautiful meal of the lot IMHO. It was some good fun and you can see the images on the sports fishing website. Rob Breadner from High Octane shot the pics. I like this one showing me guilli and tony in the middle of a masterpiece: 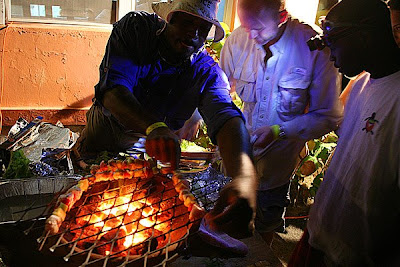 It helped raise the mood after our tragedy from earlier on, but it was still going to be difficult to be on the boat before 5 am the next morning. All hands were on deck before 5 am and we were one of the first boats out of the harbour and heading to the same places that we did well with on the last few trips. Something had happened in the night though because we trolled and trolled and never got hooked up once. We had several marlin come up and hit our baits, but it just wasn't to be. We saw birds, caught a wahoo and even saw some mahi mahi, but we were only interested in Marlin. Kiesha was the only one excited about the Wahoo, but that's because i think it was the first one she ever caught. 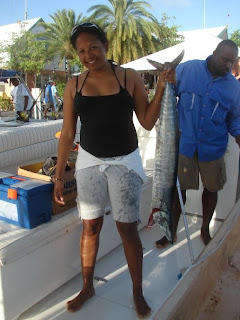 It was a good thing that i couldn't hear the boats far away too because hearing my Dad catching all those fish one after another would have been just too much. He released two blue marlin and three white marlin putting him over us by 300 points. Rum and Coke a boat owened by a friend from the UK tied with dad after releasing three small blue marlin late in the day. The guys were tired and depressed towards the end of the day and Big John, Kiesha, and Ross fell asleep up in the bow while Tony and Guilli watched the gear at the back. We had five minutes left before the official end of the tournament and i decided to play a trick on the sleepers. I think i did it to liven up the mood. We used two rods with 50 lb test line and with only 1/3 drag being set for the strike (17 lbs) it doednt take much for the line to get pulled out. I took of the ratchet which is like a lever which makes the noise as line is coming in or going out and silently reeled in the lure. Once it was in, I unclipped it and clipped the line onto our biggest black bucket. I tossed it over the side and let the line free spool as we powered away from the bucket doing our regular 9-10 knots of trolling speed. When it had gone a good distance i flipped on the ratched and the noise was just as if a marlin had taken our lure. Line peeled off the screaming reel and commands were shouted at the crew who scrambled to clear the other lines and teasers. "Ross get on the harness!" i yelled as line continued to peel off the reel. The sleepers were falling over themselves and Tony, Guilli and I struggled to act normal. I pretended to call in the fish to ASF radio and told Kiesha to video this the fight. It took ross 15 minutes of professional fighting technique to get the "fish" close to the boat. Kiesha did a great job of shooting the action and John held on to Ross just in case. 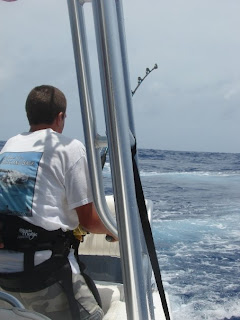 "Its pumping", yelled Ross. As it got close i positioned the boat so the "fish" was straight in the glare of the sun. It was hard for the sleepers to see what was happening. They didn't even notice Guilli and Tony's smiles escaping uncontrollably. "John its coming to the boat...get ready with your gloves". John was just about to grab the leader when he spotted the bucket burst to the surface deep in the glare down wind of the boat. It was at that point that the non sleepers burst too. We rolled around on the deck in side splitting laughter. We had heard stories of this sort of thing, but had never pulled it off. Ross was exhausted and his arm was pumped full of blood from the fight. Tony pulled the bucket out of the water and gave it to Ross who could only laugh himself. 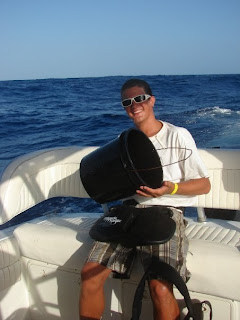 It was time to go back to the dock and that open bar again. 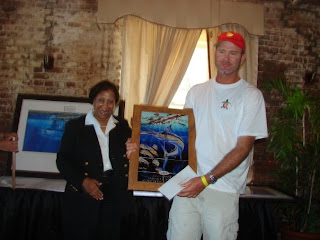 The next day at the prize giving we got our trophy for placing 3rd, Rum and Coke was 2nd and Dad and his crew finished with a record breaker of a Dolphin fish and 1st place in the marlin division after winning the tie. 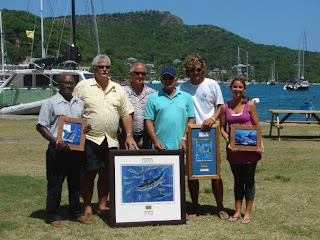 The organizers actually have ross a prize for fighting and landing the only bucket of the competition too. 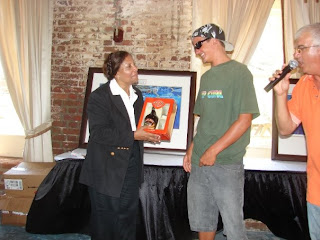 Tony and Big John found it hard to smile even with the 3rd place trophy. 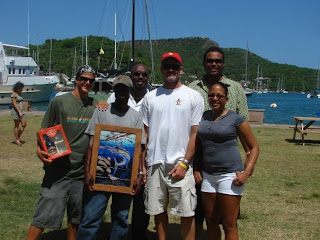 Our Adventure Antigua team has had too many top 5 finishes and it is time for us to win a tournament. We haven't given up though. In fact we have gone out twice since then and each time have done very well. Since my Dad got the trophy he has been hard to put up with. You would have thought he had won by miles and miles and nobody even came close. I guess that's the kind of attitude you would expect from someone this short when they finally beat their son at fishing: 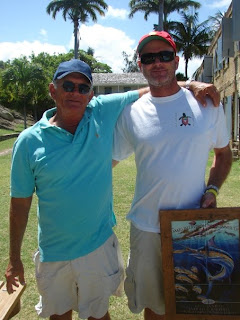 Anyway, I have eaten so much fish that tonight its time for a T-Bone. L8r....

PS the video is on FACEBOOK and is R-rated due to all the foul potty mouthed fishing language. If you wanna see how a man can catch a bucket look for John Watt's videos. All the photos except Rob's cooking one are from John.
Posted by 365 at 10:59 am

Tony was smiling ONLY because I begged him to!! Loved the story, sorry about the fish!