I know my last blog was about a trip to North Beach Barbuda and you probably are getting sick and tired from hearing about how beautiful it all is over there, but i have to tell ya about this weekend's trip. One of the parents from The Island Academy School contacted me about taking some of the Grade 6 class on a camping trip to Barbuda. It sounded like something new and fun so i geared up with the owners of North Beach to offer them a good rate on this adventure. We left Jolly Harbour with 15 kids and 10 adults some time around 11 am on Sunday. We had just loaded enough bags to stay a few weeks even though it was just a one night trip. Ross and I couldn't believe how much stuff people were bringing, but the boat handled the weight well. We were in Barbuda in about 90 minutes. We cruised up the West coast counting turtle tracks along the pink sand beach. It is nesting season now of course. We got to Cedar Tree point and anchored for a lunch stop and a swim. Just as i mentioned the words swim, we spotted the little sharks. There were quite a few little reef sharks swimming up and down the shoreline looking for pilchards. 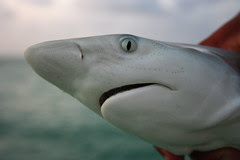 I explained that this most wonderful threatened species gets its start in the shallow inshore habitats at this time of the year once the mommy sharks have given birth to them. I told the kids how the mom's know by instinct that they have to leave the area once they had birthed their young ones so that they wouldn't mistake them for their next meal. Upon hearing that the mom's had gone back out to sea two or three of the kids jumped in. We were only a few meters from the shore but i was still impressed at how brave these kids were. Before long we were on board again going further up towards North Beach which would be our camp for the night. 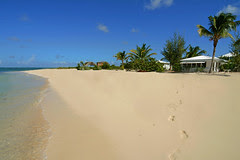 We were going to use one of the cottages for showers and the pavilion as a dinner spot, but the tents would be sleeping quarters for the group. Ross and i would be sleeping on the boat. Once tents were up I took some of the kids up the coast on a beach combing mission. 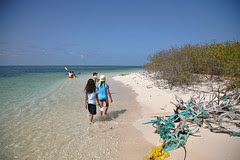 You know from my blogs that i love inspecting the flotsam and jetsam, and i had told the kids that we would probably find at least one message in a bottle. Most of them didn't believe it, but one little girl was very confident and walked ahead eagerly checking each washed up bottle. I collected my usual string of fishing floats which i hang around our boat lift and at my home all the while looking for messages. Its incredible what floats up.......far too much. Some of the kids found a large wooden spool that i suppose must have contained cable at some point but was now lodged in the sand just of the shore. 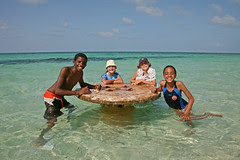 They pretended to sit around it so that i would take a photo of them. That would have been the perfect lunch spot and it reminded me of how we started the company doing the "eco tour" way back in 1999. These photos were taken by Roddy during the early days of "eli's eco tour". haha 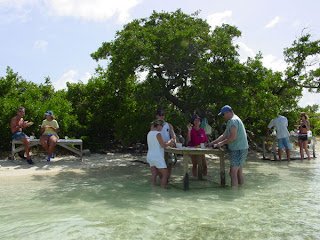 How time flies along at a rate of knots! This photo looks like it was taken just yesterday. That boat is now in Thailand! 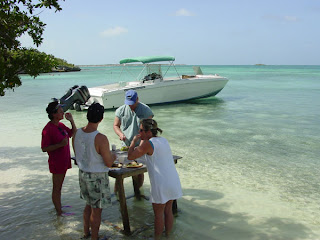 Anyway, a few minutes later the little girl who had been searching so hard for a bottle managed to find one. There were moisture in the bottle and most of the ink was gone, but we could tell it had been sent from a German cruise ship somewhere in the Atlantic way back in 1998 when these kids were only a year old. Crazy but true. I think the message must have been stuck in the sargasso sea or something, but here is was ten years later on a beach in the Caribbean. Some of the kids thought i had left it on the beach for them. I had heard this from a grown man once before while doing a charter here in Barbuda. Some people just find it hard to believe. Why?
We were gone for a few hours and by the time we got back it was time for tea and showers. The kids quickly got into a hard core game of volley ball and something else very noisy while the adults got dinner sorted out. A large mass of fire wood had been collected by the kids and they kept asking me when they could start the fire. The sun was still up, but they wanted the fire. I told them that after dinner and when it got dark we would light it. One of the kids asked me if he could light it with his own little box of matches. I laughed and said that i would let him try once it got dark. I asked him how many matches it would take for him to light it. He said one match would probably do it but at the most he would use two. I laughed again, but later after dinner he astonished me with a fantastic fire set with just one match. How did he get that good? I was scared to find out....
Anyway, the fire lasted all night and so did the kids. 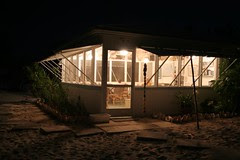 When Ross and i left them in care of the parents back in the North Beach base is was after 10:30 pm and they looked no more tired than when we first saw them that day. Out on the boat the moon was bright enough for Ross and i to go for a little snorkel session without underwater flash lights. It was a pretty cool experience, but once back on the boat the the shower was very cold. It didn't take long for both of us to fall asleep. At 4:30 i woke up and in the distance could see kids still playing by the fire. I was so happy to have moved off shore for the night. Orders to the kids were given fairly early the next morning. Tents were to be packed up before b'fast and once we had all had some eggs we were to load the boat. The first part of the orders went as planned but the loading was done mostly by Ross, an adult and me while the kids kayaked and played in the sea. 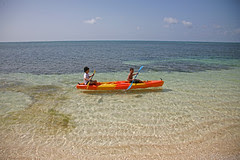 I couldn't blame them though as when i was their age i could never get enough. We were on the move after saying goodbye to the guys at North Beach before 10 am and cruised slowly down the coast above the amazingly colourful waters that are typical there. 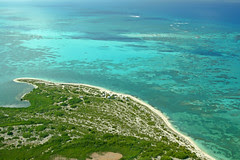 The plan was to go to "Louis Beach" which is where ocean waves generated by Hurricane Louis washed through the beach and made another entrance into the lagoon. It was now covered up but still called Louis Beach. Boats from Codrington Village were going to collect the gang and taken them to the Frigate Bird Sanctuary deep inside the mangrove habitat. I stayed back and made lunch which was just finished in time for their return. After lunch and a little playing in the pink sand we cruised up to Coco Point for a little snorkeling before our cruise back to Antigua. 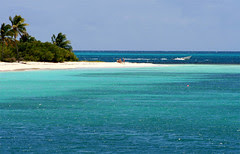 Ross took a group of little ones and a few parents outside the reef and managed to see a small hawksbill turtle as well as many other fish. One of the kids who had never snorkeled before said she saw a "dorey" fish: "the one like in finding nemo". The ride back wasn't too bumpy and we were in Jolly before 4 pm. All in all it had been a fun trip and Ross and i were going to sleep very well that night. I am sure that everyone had a good time.
Posted by 365 at 3:08 pm

I grew up in Barbuda as a child (1980 to 1986) and remember running around 2 Foot Bay w/ my big brother looking for bottles with messages in them. I can only imagine what has washed up on those shores since then!