Understanding Windguru and weather in Antigua

Here at Adventure Antigua weather forecasting is an essential tool used in our business. Yesterday we had a tough one with some bad weather that rolled in. We sat glued to weather maps, radar, and satellite images on the computer before we made the decision to postpone two boat trips for the day until thismorning. As someone who monitors weather every day and then has to send several boats out, i see what forecasts work and what doesn't. No site is 100% accurate, and many are total garbage. Dont ever use yahoo wather or weather.com's animated forecasts. I have never seen them say we would have a sunny day here in Antigua. The most simple forecasting site giving long range forecasts that has the highest degree of accuracy for Antigua and Barbuda is windguru. Coming from 17 years of competitive windsurfing i can tell you that there isn't a group of more addicted wind and wave junkies that windsurfers, and windguru was set up by a bunch of them. When i first heard about it i thought there was no way that these guys from Czech republic could tell me what weather i could expect in Antigua next week. All my friends were telling me that it worked so i added windguru to my favorites and started checking each day. It's been years now and they have been incredibly accurate predicting cloud cover, rain, winds, and waves. They are are also accurate at predicting wave direction and wind direction. The forecasts are so good that i think our local forecasters here should just tell people what windguru is forecasting before doing or saying anything else. So often windguru will forecast a weather event like strong winds or big rain or huge waves and we say to each other: ''Windguru has gone mad again as there are no storms forming and nothing out there''. We then have to eat our words a few days later when a storm forms a thousand miles away and things start to look like they will be right. Last year was the best though when a week before Hurricane Dean appeared it was forecast by windguru. Everyone thought that windguru had gone mad until they saw the clouds coming together on sat maps.

Anyway, i keep hearing people say they find it difficult to understand windguru. According to their site: ''WindGURU is a service specialized for forecasting weather, mostly for windsurfers and kitesurfers (but not only...). Forecasts are based on data produced by weather forecast models. Windguru is able to provide forecast for any place on planet Earth. The main reason to create this site was the idea to get the forecasts quickly and easily without wild clicking the mouse while searching for meteomaps throughout the internet.''
So it should be easy and i want you to figure it out.
Using Windguru's seven day forecasting tool:
Go to the website and using the drop down menus for the 'geographic area' locate the Caribbean. Then go to the country and select the Antigua and Barbuda one. Then below that you see a menu for 'Spot', select Antigua and press 'GO'. You will now have the most accurate forecast for Antigua there is at this point IMHO. Lets show you how to figure the info out. I cut out a bit of the main image and drew a little arrow in the top left corner pointing to the day and date which in this case is today Wednesday July 9th. You can even see the time of day as you look from left to right under the date starting from 5 am and going to the right of the image ending in 8pm. 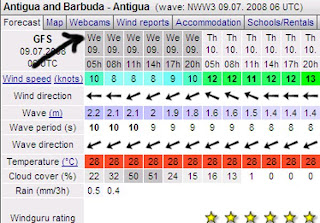 Ok next we will speak about wind speed and wind direction which are on the line below the time of day. In the image below the red line is pointing to the colourful wind speed box on the far left which forecasted 10 knots at 5 am. By the way you can adjust it to be measured in whatever unit you want from mph to knots to kmph. I like knots and is what i understand. Here is the image: 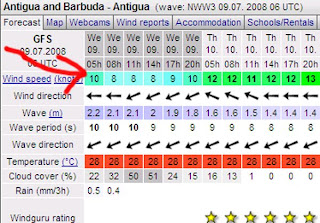 You can see that by the end of the day it is saying that it will be 13 knots at 20 hours (8pm). Under the colourful wind speed boxes there is a line for wind direction. On the far left it is pointing from right to left using the compass directions. East is on the right and west is on the left. North is up top and south is below. In this case the winds are coming from the East on the right and blowing towards the west. The next thing is something very important for boaters and especially ones that are kept on moorings off beaches at areas where it is normally calm. Many boats here in Antigua would be safer if people would keep an eye during the winter on this part of windguru. Wave height and wave direction. Waves don't always come from the east here in Antigua. The image below shows the red arrow i drew pointing at wave size or height. As you can see at 5 am it was 2.2 meters high and over on the far right at 20 hrs they will be 1.4 meters so the waves are dropping through the day. 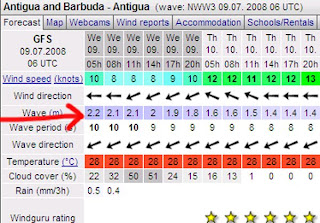 Under the wave height line there is the 'wave period' line which tells you how long a particular wave will take to go past a specific point in seconds. A longer wave period (higher number) means the wave is essentially thicker or wider. There is more water in that wave and more power. Higher numbers are good for surfers and bad for your moored boat or beach house in a storm. Below the wave period is the wave direction line which is so important. Here at 5 am you can see that the forecast was for waves coming from the north-east (remember east is on the right and north is up top). This will let you know if your favorite beach will be calm or not. That if you know what side of the island your beach is :)
Temperature, cloudcover and rainfall. The next red arrow i drew points to the most important part of the forecast for many tourists coming to Antigua and Barbuda. The temperature. In Antigua the temperature stays the same for most of the year so i don't ever look at this part of windguru. Here at 5 am it said it would be 28 degrees C and as you can see they say it will be the same all day. Never worry about the temp here in Antigua. Its always warm. Under the temp line is 'cloud cover percentage' which is important for those beach people who want to get loads of sun on their holiday. Today at 5 am it said over on the far left at the bottom that it would have 22% cloud cover. At mid day it would have 50% cloud cover. Under the cloud cover line there is the rainfall line which is important. People always are asking on the internet forums about how much is it raining in Antigua. Here is your answer. Today between 5 am and 8 am they forecast that .5 of a mm would fall on the island and between 8 am and 11 am .4 of a mm would fall again. It didn't happen in Jolly Harbour today but i am sure that somewhere on the island got a 30 second rainfall over the past 6 hours. OK that is how simple it is to get an accurate forecast for Antigua and Barbuda. Just follow these instructions and rest assured that its mostly sunny here in Antigua. 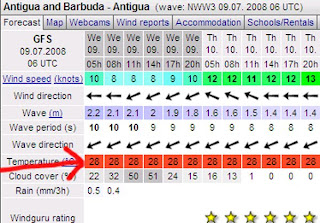 Excellent Eli! Xabier had given me a crash course on a day like Tuesday so we really did not get down to the nitty gritty details. That is the site that he ALWAYS goes to. Your explanations are good! Us lay people (like me) who don't windsurf, don't have a clue which way the wind comes from and believe me Sheldon has tried to explain it to me a 1000 times...lol....

Thought it would be interesting to check out where I live, Cleveland, OH. We've got Lake Erie, part of the Great Lakes system, all together a very large body of water, an inland sea. We have beaches, surfers, boaters, windsurfers... Unfortunately, Windguru doesn't include Ohio. Oh well, it was an interesting lesson, Eli, and I'll keep an eye on the other areas of the world that I care about.

I did check Orlando, and it's there (minus the wave information :) ). Added it to my faves.

actually you can get any site on the planet, but u have to register and then create your spot by giving them your longitude and latitude.

Greetings from St. Maarten
Thanks so much for posting this.
This is invaluable for all of us.
I use Windguru frequently but have never been able to figure a lot of it out.
Barbara
http://barcann.livejournal.com/

Got Cleveland, OH added, and it's very cool. Only issue - it's got the exact same temperature for the next week (different from all other forecasts), and no rain in the forecast, including today. However, I'm looking out my window and no, wait, it's wet but the rain has stopped. Hmmmm....

cool post! was looking for info on surfing conditions...

Also check out Windfinder.com, they do not only offer wind and weather forecasts but also real time wind reports. And I think the design is much cleaner than windguru:

Eli, I think I can now finally understand the Windguru forecast!!! Thank you so much for taking the time to put together a step by step explanation in such simple terms. You're a star!!