A very sad story two days ago surfaced after a 40 foot open boat was found with dead bodies on board. Eight bodies were found terribly emaciated inside the boat with at least one having an African (Mali) ID card. Here is the very simple theory about what many of us think happened. The African refugees piled into the boat and set off from somewhere in North West African with the Canary Islands as their destination and their hope of a better life, broke down or went off course and started the deadly drifting passage across the Atlantic. It generally takes somewhere between 60 and 100 days to drift across to the Caribbean along the stream of currents i spoke in great detail about in this blog. According to official reports out of Spain, 30,000+ people a year arrive in the Canary Islands each year from Senegal, Gambia, Guinea Bissau, Cabo Verde, Mauritania and Morocco. This map (forget the red line) shows the Atlantic just for reference. 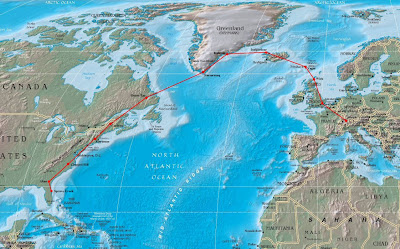 Estimates gathered from newspaper reports all over the central Atlantic suggest that somewhere around 600 people perish each year and another 300 go missing trying to get to the Spanish islands off . In June of 2006 a smaller boat was found just off Barbados in a similar state. The boat was half the size and had 11 bodies on the boat with papers of 36 people in total. An international investigation was started and eventually a Spanish man who had taken money to tow the boat to the Canaries was charged after it became apparent that the line was deliberately cut. Usually there wouldn't be only 8 people in a 40 foot boat and i have a terrible feeling that there were originally more in the boat found here. The boat is one of many models designed by the Japanese. "Over 30 years ago a Japanese Motor Company was given the task of designing a hull to help promote fishing in third world countries. The hull would have to withstand the rigors of daily commercial fishing, carry very heavy loads as well as be extremely power & fuel efficient. Primarily manufactured in Japan, there are more than 100 thousand "Panga" boats in use around the world with many of the original first year production hulls still in use today." from panga.com You can actually see the model (same colour too) in this website from Columbia. Here in Antigua, Robert Shoul is the dealer for these boats through his company "Outdoor World". The boat can carry 8,800 lbs.
If anything is drifting free anywhere near Western Africa within that huge circular current it will end up passing or drifting up here in the Caribbean. We have the garbage on our windward beaches to prove it. That blog i mentioned speaks in detail all about that current.
One of the first books apart from Old Man and the Sea that I really enjoyed was "Adrift" which tells a story of a yacht race gone wrong where single racers compete sailing their boats by themselves across the Atlantic from the Canary Islands to the Caribbean. The author's boat hit something at night and went down very quickly off western Africa. He only has time to throw over his inflatable life raft and grab his small emergency abandon ship bag. He drifts for 76 days and ends up just off Guadeloupe. It's an amazing story of a man's will to survive and the way he succeeded by using his knowledge of the ocean. He was lucky enough to have that grab bag which was prepared for such a disaster. The Africans who possibly piled into the 40 footer after sunset one fateful evening didn't take much with them as I am sure they had expected to be in Fuerteventura before sunrise. The trip from point to point is just 60 miles as seen in the google earth photo i took seen here. Even with 8000 pounds of people (50 people) on board as is possible according to the specs of the boat they could make the trip from the closest bit of Morocco with just under 10 gallons of gasoline in about six hours. The last thing they expected was to be adrift and floating for months across the great ocean which is why it is so easy to see why they would have perished without water or food. In the boat found off Barbados they found a note: “I would like to send to my family in Bassada (Senegal) a sum of money. Please excuse me and goodbye,......This is the end of my life in this big Moroccan sea”.
Someone called in to the Daily Observer Radio yesterday and said that we should all be thankful of how lucky we are here on this little island. I tend to agree with him.
For more info you can read this report on this type of migrant issue.
Posted by 365 at 8:12 am

absolutley tragic - and i imagine this blog is probably as close as these poor souls will get to a proper eulogy. it certainly does put life in antigua into persective and you are right. we should all spend less time 'bitching' about things that could be better, and more time giving thanks for what we have here, which is so much better than anything experienced by the majority of the human populaton.

My prayers to the families who may never know the fate of their loved ones. Peace and rest in peace

Thank you for telling their story. Otherwise, I would have been ignorant to it. You're a person with a purpose. The best kind to be.

I am sorry you find it so hard to read. It's funny to see a comment making judgement on my GRAMMAR coming from someone who has no full stop, no capitals and who didn't even spell grammar correctly. I know my grammar isn't that great and my spelling is terrible, but PLEASE!