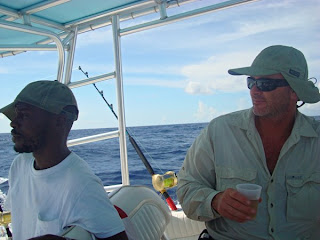 This past weekend Team Adventure Antigua took place with both of our main boats in the sport fishing tournament put together in memory of the long time president of the fishing association. The Francis Nunes tournament was plenty of fun with something like 24 boats taking part. There are some wonderful photos on their main site seen here.
On Xtreme with me was captain Tony, Guilli, Stephany, and Gavin. We covered plenty of ground looking for Wahoo and only managed to get one. We also got a small tuna, a cuda and a small mackerel. It was terribly slow fishing but we did get the second biggest fish (the wah00) which was also the biggest fish caught by a female. It was nice to get a trophy out of the tournament as our crew worked very hard and as a team. Captain JD took a bunch of his family and friends out on the Arawak Odyssey and caught loads of small tuna (too small to count as black fin usually are below 10 lbs) and one bigger one which just missed the biggest tuna prize by a scale or too. I think they should have gotten a prize for the most alcohol consumed though. His best friends runs Quin Farara Liquors and it looked like he put the contents of the warehouse on the boat for them to consume out there. The seafood festival was a great addition to the tournament with many people coming down to sample some of the food prepared on site. The party was nice as well. I just with more fish were biting. Not a single boat caught more than 2 wahoo and many didn't catch anything. When this happens in Antigua you call it a "no seed". Thankfully both of the AA boats escaped getting a "no seed" once again unlike several of the readers of this blog (no name calling but initials are P.S.). I think his was so bad it can be called an "international no seed". Needless to say, that September has never been known for it's great fishing and with so many regular fishermen saying that the catch had been bad over the past few weeks we were not that surprised at the outcome and made the most out of the lovely day on the water and back at the festival. There are several other tournaments coming up over the next few months with one in Nevis in 2 weeks. We will be there again. Being out at sea is what some of us just love. Catching fish or or not.
Posted by 365 at 11:08 am