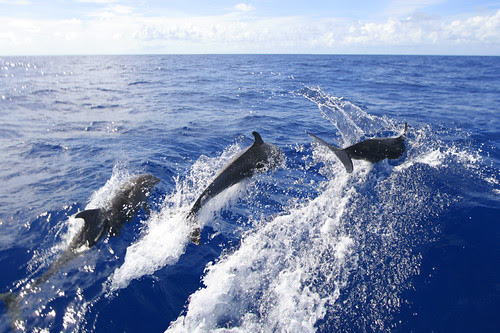 There is so much that people who want to swim with dolphins don't know about. One such dark secret is the huge dolphin slaughter in Japan. Recently i mentioned it in this blog when a Dolphin Park manager was trying to suggest that his sea lions were rescued from a cull in South America. I asked him if he meant like the ones in Taiji seen in this link.
The reason I knew about it was that years ago when many of us here on the island were protesting the way the ALP leaders were giving dolphin import permits to a dolphin park here an activist called Rick O'barry (website) came to Antigua to speak about the whole captive dolphin argument. Well he tried to come here. He was actually taken off an American Airlines flight just before take off in Miami and told that the Antigua Government would not permit him to step foot in Antigua. Anyway, he came to Antigua via telephone conference and then years later came properly to tell us about the whole concept of Dolphin captivity including the method of how many dolphins were captured. One such way was shown in his bloody video taken in Teiji. Check it here. Back then he was a radical who was taken off flights and labelled as a trouble maker. Since then info that he tried to get out has spread throughout the world and there is now a movie about the Japanese Dolphin Slaughter about to be launched worldwide done by a new more aggressive breed of Radicals. One of them is a friend from Antigua who like me owns and sails one of the beautiful Carriacou Sloops. Charles missed a few regattas over the past few years because he was deep undercover making this movie. "The Cove" is already gaining critical acclaim internationally and you can read more about it here and see a trailer here. Charles is the guy with the "goatee" you first see.

Rick O'Barry is the former movie dolphin trainer from the "Flipper" series. I understand people change, but he's a bit of a hypocrite coming out now in favour of the dolphins now that popular sentiments have changed.

I'd like to know why people take such strong positions about specific animals, based solely on their aesthetic appeal. Cute and furry white seals, intelligent and graceful dolphins. Nobody pontificates so elequently about millions of farting cows in the pastures sent to the slaughter house. Also seems hypocritical. What about snow crabs? Tuna? Mahi mahi? Snapper? Aren't they lifeforms worthy of protection too? How do these people choose their causes?

Go to CBC.ca for a documentary about dolphins. Rick is featured there too, and frankly makes himself looks like a nutter. The village at the center of the controversy used to regularly harvest dolphins like they would any other fish crop. One villager said: "to me, they're just fish, like any other."

I think there are bigger problems that could probably use the energy and drive of a man like Rick, that would also benefit dolphins - nay, all life forms in the ocean. Google "eastern garbage patch" sometime and see what comes up.

I think the reality is that Rick O'barry has been against Dolphin captivity for over 20 years and that particular point of view is still not as you say a popular sentiment. The vast majority of people think there is nothing wrong at all with a dolphin being stuck in pen doing tricks for dead fish.
To address your points more clearly though, i guess i have to decide what it is you are trying to say. I think the main thing is that you think it's stupid for people to dedicate their time and effort to a cause or a particular animal when there are so many other important issues. You think someone as energetic as Rick should be out there this week trying to help the unfortunate peopel of Palastine right?
I think this is a very limited theory. I know a great deal about Dolphins because I see them regularly out there on the ocean. To say that i am an expert and have all the answers would be stupid. Just because i see them in the wild doesn't give the the right info to say that it's bad to have them in a dirty pond here in Antigua. There are people who have more info and I am so happy to come into contact with them. Rick and many others like him educate people on issues that people like me would miss. People with experience in particuar areas should share them with others so that as a people we can all be more informed. If you are a cow farting specialist then please educate us on how the Green House effect is being excelerated by farting cows. Share the info! I think that if anyone has good info on a topic then they should share it. IF they don't then we can call them hippocrites.

To Anonymous:
First of all his name is Ric not Rick. Secondly, he has been working rehabing captive dolphins since Flipper went off the air, he is not jumping on a "current bandwagon", he is the driver and has been for more than 30 years. His reason is penance. Nobody feels worse about his previous life as a dolphin trainer than he does. So do you think the O'Barry's are wealthy from their "new profession"? Hardly....take a look at the site www.dolphinproject.org Read every single page, then come back here and give us an "educated" opinion of the O'Barrys Obviously, currently, you know nothing about the O'Barry's . Would you live in a hut on the edge of the rain forest for 6 months keeping an eye on several recently freeded dolphins. They are in shock, they don't know how to hunt. By the way, they are not captive during the rehabing, they are free to leave when ever they want. The trick is to get food to them when and where they can't see you doing so, to protect them from people and anything that wants to hurt them and all of this while they can't see or hear you, a little tricky to say the least. You are stuck in a hot muggy blind with no outside interactions, including family or phone calls for months on end. This is nothing new to Ric, he has done it many times over many years. By the way, he doesn't get paid to rehab dolphins. So until you are truly educated about the O'Barry's, him, wife, son etc., then I would suggest that you keep your mouth shut because your "Opinion" just proves your ignorance. By the way, if you stand for nothing, you WILL fall for anything.....including captive dolphin programs!
Sincerely,
Donna Breen
aka clanced
By the way, what is your name Anyonymous?

I have read his web site: reads like the manifesto of a crank. Probably at least partially a result of unprofessional design. Aside from that, I like to have more than one point of view - hence the mention of the CBC web site. Have you even seen that? I doubt it. You just swallowed everything he said on "his" site whole without any critical thinking of your own.

I'm not in favour of treating any animal badly.

Why do you want my name? So you can call me at all hours of the night and harangue me about dolphins? Someone to vent your enthusiastic zeal and obvious anger issues to? PETA member are you? No thanks. Enough telemarketers ring it with unwelcome chatter as it is.

I just find it humorous that people adopt "causes" because the object of their desire is "cute" and it's fashionable to have "a cause". We keep cats and dogs captive, is that wrong too? We make them do tricks for "dead cow meat", animals we raised in captivity, then slaughtered wholesale. We feed captive animals to captive animals! I can draw a direct parallel to dolphins in every way. How about tropical fish? Lizards, geckos? Why not start a "cause" about freeing the geckos? Why dolphins and not them? Answer that. You can't. Neither of you even touched it. You blather on with righteous indignation, but really said... nothing.

Dolphins are cute, and therefore they shouldn't suffer, and forget everything else (well, except other cute animals!).

Everyone should have the right to have their own (educated or not) opinion. Mine is that there there are two big things which make captive dolphins different from captive goldfish or even captive dogs. The main difference is that animals born in the wild can not be compared to animals born in captivity, and the second is that wild animals that are "intilligent", self aware, and generally more advanced species such as dolphins, apes, elephants shouldn't be kept as slaves.
There is more along those lines....
Of those born in the wild then you have to look at how they lived in the wild before you decide to make them captive. Dolphins swim up to 40 miles a day and dive down to 1600 feet just for the hell of it. How can putting them into a shallow dirty pool be anything near to normal? If you learn how captive dolphins are caught then you have a better idea on why they shouldn't be. Seeing the brutal manner wild dolphins are caught with as high mortality rates as they end up with would turn most people off.
I am against captive elephants, apes and many other species too. We don't have them here in Antigua, but if we did i would speak against them too. Sorry if you think that's silly. That's cool. I find it very difficult to compare mahi mahi with bottle nosed dolphins. Sorry.
Would write more and re-read but am rushing out the door to go sailing. hope to see some wild dolphins swimming free. Whales will be next month!