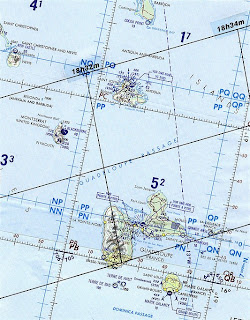 Please read more on what exactly a FAD (Fish Aggregating Devise) is here by clicking this link. From what we have seen and from what we have been told by fishermen who own them simple FADs here in the Caribbean can have a two mile radius of marine species which are all attracted or "Aggregated" by the FAD. Under the water you usually see a scene like the one i shot around this floating net some time ago:

From the very unscientific research that i have done i would guess that there are close to one thousand FADs stretched between Trinidad and Puerto Rico concentrating fish stocks around them so that fishermen can harvest a dwindling supply much easier than simply "blind searching" for fish like they did in the old days. Many of the FADs are government sponsored or subsidized too.
In the waters around Antigua and Barbuda there are dozens and dozens of FADs. A few of them have been set by local fishermen but the practice isn't common here for a number of reasons. I suppose the biggest reason is that there are not that many people in Antigua fishing for pelagics like tuna, marlin, dolphin fish, and other species that concentrate around FADs. Another reason is that most Antiguan fishermen don't know much about FADs and how they work. I think if they did then we would see more Antiguans setting them and more Antiguans fishing the French FADs in our waters. The French island of Guadeloupe is only 50 miles away and with more commercial fishermen there per capita than most islands they often find themselves into our large economic fishing zone. In fact, on nearly 100% of my fishing trips into the Atlantic I come across fishermen from Guadeloupe. Sometimes i see them just off Antigua fishing, some times i see them 25 miles east of Antigua and some times i even see them east of Barbuda. Almost all of them use FADs and have them set mostly on the Atlantic side of Antigua way out in the deep. We have found French FADs 30 miles east of Barbuda and have seen the little French commercial fishing boats catching tuna there. These small boats will easily make a two mile round trip while fishing FADs. Their methods are specific and carefully carried out. Here is a short video we shot on the weekend showing the simple markers used on a French FAD. Notice that they are not intended to be there to show everyone where the FAD is. It is very important for the FAD positions to remain secret and if you want to upset a FAD fishermen then all you have to do is fish his FAD.


I have some friends from St. Barts who also put FADs in our waters off Barbuda and tell me that there are over 100 of them out there. 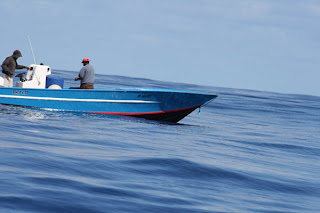 Each commercial fishermen uses boats like this one which is typical of most of the commercial French fishermen in the Caribbean. 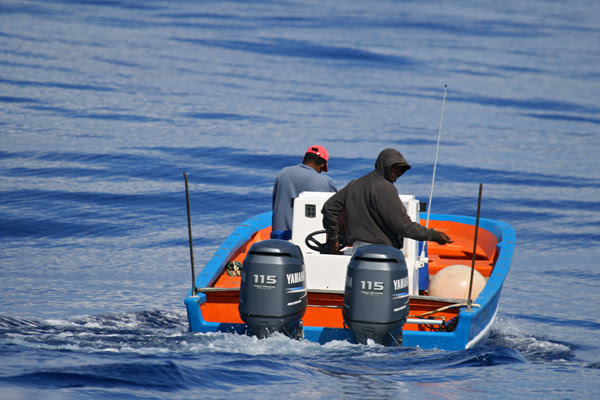 Most of them will have four or more FADs in a particular area which they work. Research has shown that tuna and other species will feed around a FAD for a short time and move to the next FAD and then to the next one almost making a circle around FADs in a particular area. The same can be true for Mahi Mahi (also known as Dorade, Dorado, and Dolphin Fish), sailfish, blue and white and Marlin. The fishermen know this and do exactly the same thing. Over the past two weeks we have been out fishing and have seen these boats on every trip. Of course they are in our waters and fishing illegally using FADs. What they do is motor quickly towards a FAD and stop to catch the mahi mahi first. If there are none they will try to catch small tuna which also concentrate around FADs. Once they have a little tuna they will then attach it to a line and drop it back over live in the hope of catching a big yellowfin tuna. I have spoken with French fishermen who have told me that they have gotten as many as 18 big yellowfin in one day doing this method. In all my life the most tuna i have ever seen any Antigua boat catch in one day is about 5 and usually boats catch none. It's a rare event for an Antiguan boat to catch a yellowfin tuna these days. As soon as the FAD fishermen thinks the FAD isn't productive they power up and quickly move to the next FAD which is usually within a few miles. They do the same thing there. We estimate that the average fishermen who fishes here in Antigua from Guadeloupe has at least five FADs. I think that we may have 150 French Fads in our waters, but this is just based on the reports from my friends in St. Barts and on the numbers of FADs we have randomly found out in the Atlantic. It is also my opinion that there are huge environmental, social, and economic implications by all of this. There are no controls and no study of FAD fishing in Antiguan waters. Those who know about Antiguas fishing know that there are no proper controls on any of our fishery but least of all on illegal pelagic FAD fishing.
FAD fishing is exponentially getting more and more common and the Caribbean is one of those places where a huge number of unregulated FADs have been set. There can be no doubt that they increase the catching rates for those who use them. I think that if more fish are concentrated or lured in around FADs and more catching is being done there then there are fewer fish everywhere else and fewer fish being caught away from the FADs. It's not just fish either. We noticed a turtle feeding off of a FAD on the weekend. It won't be long before the fishermen start using nets on these FADs as they do in the Pacific and then we will have a much bigger problem. There are huge environmental implications and since there is no study or control of FAD fishing in the waters off Antigua and Barbuda I think this is something that the Japanese funded Fisheries ministry here in Antigua needs to think about. It's not like they don't have the money!
Posted by 365 at 6:17 am

great article eli... you should send it to Scientific American, National Geographic etc. .. and try to get wider coverage. shame the govt here into doing something about this! well done for sticking your neck out.. hope those frenchies don't sabotage you in the fishing competition this weekend!!!