The Adventure Antigua team takes themselves out on a tour.

Back in the early days of Adventure Antigua I would often take the entire crew (back then it wasn't that big) on regular outings when we didn't have tours. If we weren't fishing we were taking friends out on with some lunch and drinks. 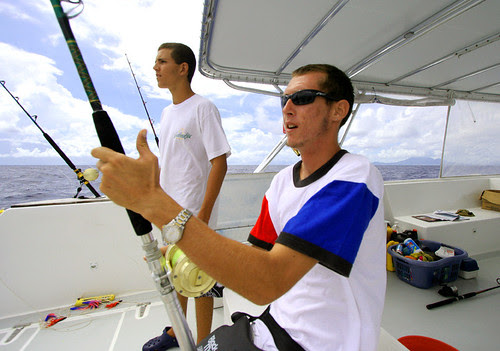 Our favorite "company outings" were the ones where we went to St. Martin. Nearly 100 miles down and 100 back and non stop laughing and enjoyment the entire time. 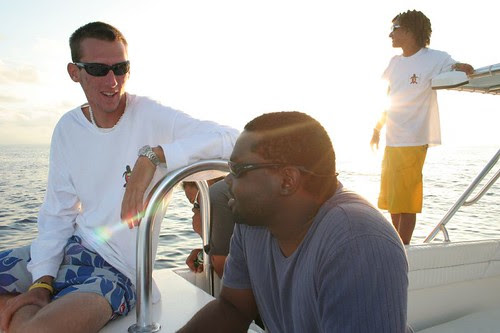 I have many fond memories of us doing a tour on a Friday, dropping off our guests at the cruise ship or hotel and hustling back to clear customs, grab some things and leave into the sunset with the St. Martin "goto" set on our GPS. 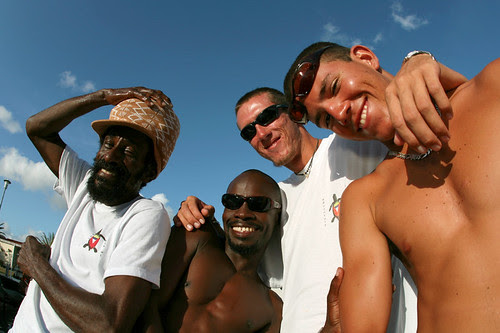 It's one those sessions that we would dip into our own special rum punch and take the time to enjoy the ocean even more. 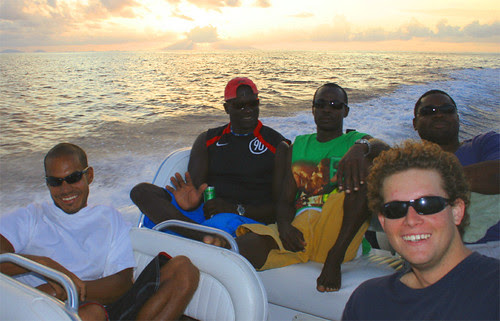 Wow. We consumed too much rum on some of those trips! 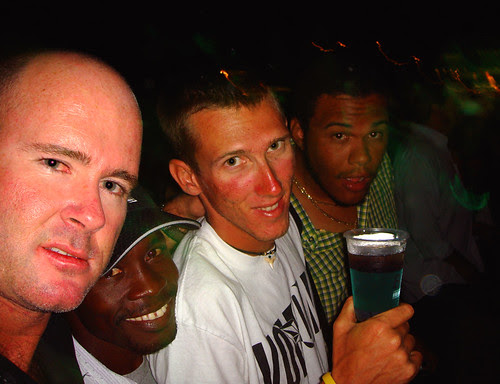 BUT I think we will have to do one of those st martin trips again soon.
Anyway, we haven't done a proper crew outing for some time and all our group "meetings" have either been on the dock or over at Foredeck Bar in Jolly Harbour on a Friday for their happy hour. Of course September is probably the slowest month of the year for us so we do have quite a bit of free time on our hands. I knew there were no tours scheduled for Monday so I sent a text to the crew and Nell telling them that they all had to meet by my house at 9 because we were going sailing. I also told them this wasn't optional just to make sure they all would be there.
First to show up at 8:45 am was Leslie. Then JD and Tony shortly afterwards. Then Chris, Alex and Jason pulled in just before Nell at 9 am. Mom was the only part of the Adventure Antigua team that wasn't on this trip and i will organize another one with her soon. She was running the office and couldn't make it. Anyway, for me it started well because usually if the guys know that we don't have tourists to pick up on time they can be a bit late. This time everyone was there on time and I was very happy not to have to wait. We jumped right on to Ocean Nomad (the only sailing vessel in our small fleet), and let go dock lines. We were off! "Fenders in!" was the call by the three captains on board almost all at the same time. The laughing had already started. Within no time we were sailing towards Johnsons Point and up the south coast passing Curtain Bluff and Carlisle Bay on route to Falmouth Harbour. Our destination was Bumpkins Beach Bar on Pigeon Beach where Nell had placed a lunch order. The winds were better than i had expected probably blowing between 12 and 16 knots right on the nose. 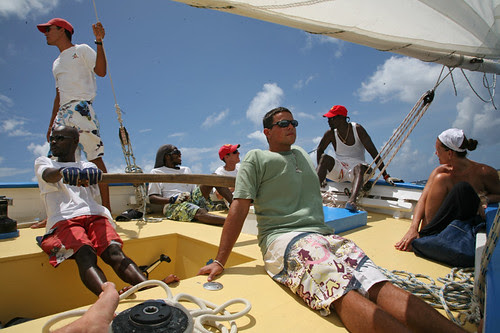 Two of the crew had never been sailing in their lives before so it was especially enjoyable for us all. Tony and JD are doing a structured sailing course next week so it was good to have them helping out in all the tacks we did up the coast. 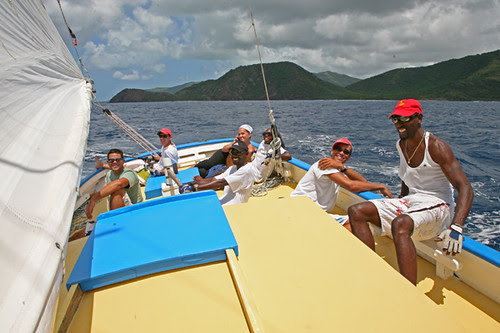 Lunch was pretty good and we decided to go up to The Yacht Club Marina for ice cream. Of course as we arrived back on the boat each of the boys had to show that they had the best flips and dives. There were quite a few flops which usually ended in wild laughter. 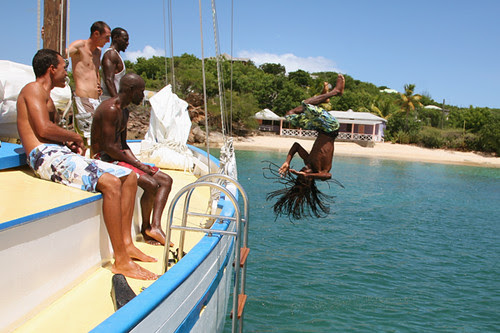 Leslie's flip attempts were definitely the best of them, but i can't embarrass him by showing them here. 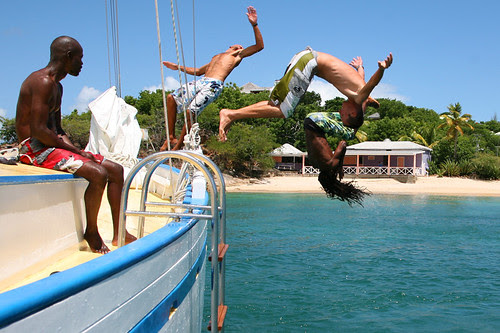 We actually played there for nearly an hour forgetting about the ice cream for a quite a while. The anchor came up and we headed over to Seabreeze in search of some sweets. Unfortunately it was closed, so we set the sails and head out of the harbour. The cruise back was very relaxing even with five or six gybes. 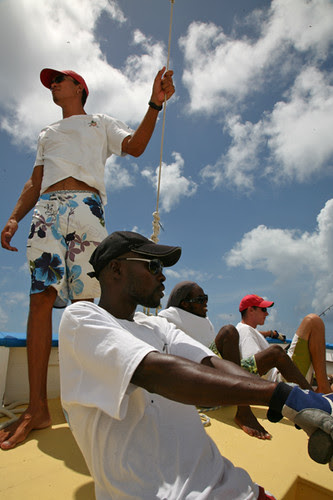 For a fairly inexperienced crew made up mostly of power boaters they did very well. 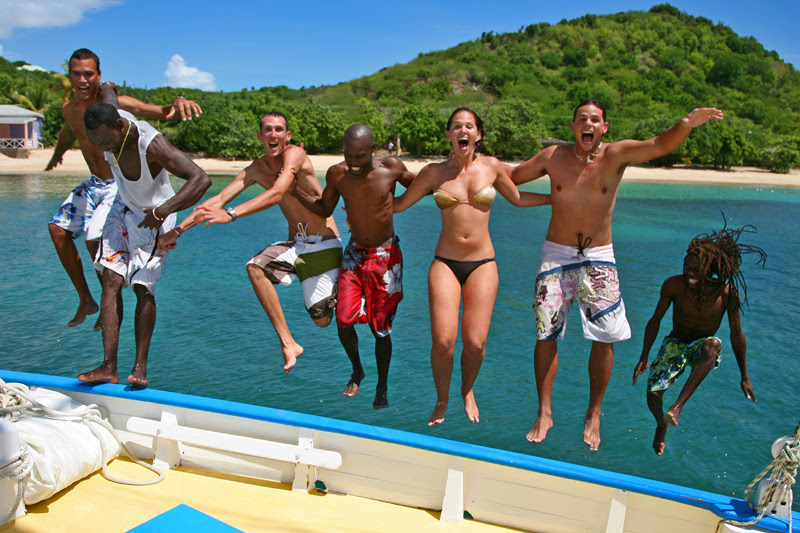 I think each one of us enjoyed the day and it was probably one of the best team outings we have ever done. Simple but fun.
http://www.adventureantigua.com/
Posted by 365 at 7:29 am

hehe - wouldn't mind working for a company like that!

Is Leslie back working with you?
Donna

Looks like a great company outing!! The company that I work for do something similar in the summer, but it does not involve the Caribbean or being on a boat. Seeing these pictures makes me miss Antigua and I hope to come visit in the near future. I will be sure to use your Eco tour again, it was a blast.