Another crazy decision (possibly illegal) by a "caring" government. 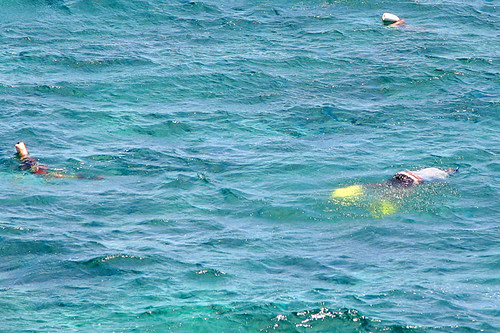 First of all, when I speak about the government in this case, I am speaking about the men and women who make up the Cabinet of Antigua and Barbuda. You can see who these people are by clicking this link.
Anyway, Antigua and Barbuda has quite a large area of coastline that is legislated as Marine Protected Areas. One such place is the NEMMA and you can read something i wrote about the North East Marine Management Area by clicking here.
If you read that article you will see that while our government is quick to take international funds needed to set up marina protected areas, they are not so quick to accomplish their side of the bargain. NEMMA remains noticeably unchanged and many including myself would say its marine eco systems have never been in such poor shape with a huge increase in uncontrolled and unsustainable fishing being done within the park. There is no visible or noticeable management of any marine protected area in Antigua. If someone can show me that I am wrong then I would be delighted.
The point of this article is not only to show a dramatic failure of this government to set up their marine parks and specifically the NEMMA which they received money to do, but it is also to highlight one of the many major failures in that respect. In this case I will be speaking about spearfishing which according to the laws of Antigua and Barbuda is totally illegal unless the person spearfishing has a permit from the Chief Fisheries officer. I am not 100% sure but I think that back in 1999 a cabinet decision was made that the Chief Fisheries officer was not to give any of these special permits. So not only is spearfishing illegal, but it is being done within the Marine Protected Areas. 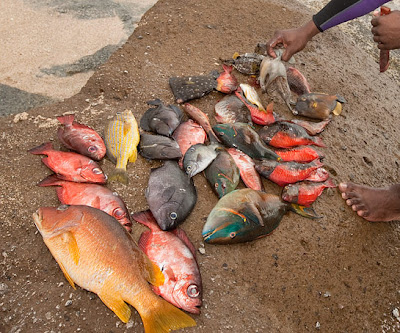 The photo above was taken by the guys at 365antigua.com on Windward Beach in Falmouth and shows a typical catch after an hour or two of spear fishing.
This week I had a guest on one of my boats who told me that he met some men coming out of the water at long bay with their spear guns and a huge collection of speared fish. Most of them were parrot fish too. Anyway, he told them that he used to be an avid spear fishermen himself and asked if he could pay them to take him the next day. They agreed and took him spearfishing for 5 hours the following day.
This week I also was in English Harbour and saw someone i recognized from one of the visiting yachts walking down the street with his snorkeling gear and his spear gun. This wasn't a local spear fishermen and I was surprised to see him just walking down the street with an illegal spear gun as if there was nothing wrong with it. Of course I had no reason to be surprised.

Recently I spoke with Chief Fisheries officer, Cheryl Jeffrey –Appleton, about spear fishing that was being done inside the marine parks. She expressed great frustration and told me that the Cabinet of Antigua and Barbuda met recently and made and executive decision that the laws regarding spear fishing in our waters would no longer be enforced. Surprised, I asked for clarification, and she said that people with or without fishing licenses or permits from her would be able to spearfish anywhere around our waters. Again, I asked for clarification specifically asking if people would be able to fish within marine protected areas like NEMMA and Bird Island for example. She said they were instructed by this executive order not to enforce any of the laws surrounding spearfishing. She clearly didn't support this decision and when I spoke with other fisheries officers they too were against this decision and were totally surprised at the decision permitting people to spearfish.
Before anyone comes to the wrong conclusion about my views on spearfishing I would like to explain them. I believe that spearfishing should be legal but should be carefully managed and monitored so that it would only be permitted within certain areas and that only certain fish would be targeted.
As a kid I spearfished regularly and know how indiscriminate you can be if you want to be. A spear gun is no different than any other gun in that you point at your target, pull the trigger and shoot to kill. It doesn't matter what that target is and it's up to the person pulling the trigger to consciously make the decision to pick species and the sizes, and its up to them to also decide where to use the gun and where not to. Without the coast guard or fisheries division checking there is plenty of room for problems.
I see people regularly shooting all species and all sizes in various different areas including within marine parks.
I think that Marine Parks, regular dive sites and tourism related snorkeling sites which only make up a tiny tiny fraction of the marine environment should be off limits to any sort of fishing. Areas where fishing is permitted should be free to various types of fishing including spear fishing if managed properly.
Although this is my opinion, it is not that of the Chief Fisheries officer. I have been told by a Cabinet Member that she has written a report on why spearfishing is currently illegal in Antigua and why it should not only remain illegal but why the laws should be enforced. This is key because as we all know enforcement is the only thing that matters.
I spoke to this Cabinet Minister to find out why the decision was made to tell The Fisheries Department, the Coast Guard and by extension the Police to not enforce the laws about spearfishing. According to the Minister i spoke with today, the Cabinet Minister responsible for Fisheries spoke before Cabinet claiming to be representing the Fisheries Ministry asking that the Cabinet members vote to stop enforcing the laws so that people would be able to spearfish once again. The minister I spoke with said that he and the other ministers didn't have any background info about spearfishing and trusted that the Minister was representing the Fisheries Ministry and all of their technicians. It was only after the decision was made that it came to light that this decision was not supported by the Chief Fisheries Officer who then presented her report. I'm not sure where this report was presented but I hope to publish a copy of this report in the near future.
I could go on and on about why this possibly illegal Cabinet decision is bad for our country, but I will simply say that one of the reasons that many of our snorkeling sites are in trouble in this tourism based economy is that spearfishing and other forms are uncontrolled. Snappers and groupers are almost extinct in Antigua and the reefs and beaches are in decline. If you think that my statement about snorkeling sites are based on opinon and not on fact, I suggest you do some research. Go on tripadvisor's forum for Antigua and search for "snorkeling". What do you see our visitors saying about Antigua's snorkeling? The sad reality is that the only good snorkeling in Antigua is done by boat now because all the shore sites are over fished.
This decision is a slap in the face to everyone involved in tourism and to the Fisheries Department too. In fact, the biggest victims in all of this are the people who will probably never get a chance to see many of the fish that are being targeted.
I am sure that the Cabinet decision was one made in haste without proper information and should be revisited immediately. I will try to publish the report soon.
Posted by 365 at 11:22 am

Came across this report by Fisheries:

If they implement half the things in it things will be much better.

Do you know that it is estimated that Guadeloupe remove EC$20.4 million worth of fish from Antigua waters. On the upside Fisheries have fined over 129 individuals since the 1992 reguations. They should publish the names of all those involved in illegal fishing.