Why are the skies so clear sometimes and so dusty at other times? 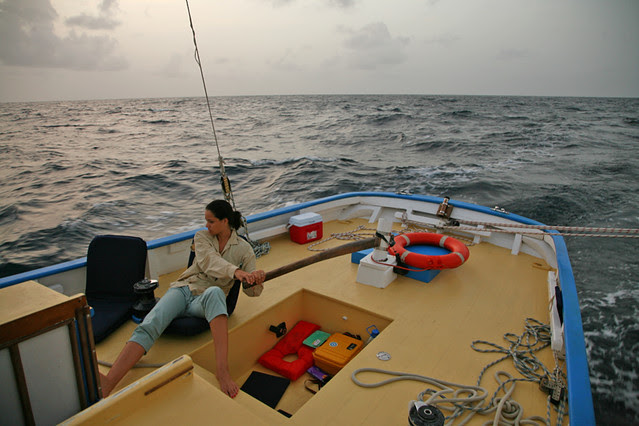 The photo above is of my wife on the helm of our boat during a July holiday trip 200 miles over to the British Virgin Islands. As you can see even far off shore the skies were full of dust.

This article below was printed in the Enjoy Magazine, published here locally by the Observer Group and Antiguanice.com. I write a piece every two weeks for them. This one was edited down from a blog i did some time ago. I hope you enjoy, but if you want the longer one check this link from my blog written over four years ago:

Over the past week we have been blessed with some of the clearest skies that anyone remembers. Last week I spoke with Shelly Hulford who has been living out on Curtain Bluff's point for nearly fifty years, and she says that in all the years that Montserrat has been "sitting in her living room" she's never seen it as clear as this. Yesterday on our Classic Yacht sailing tour we could see Guadeloupe, Montserrat, Redonda, Nevis and St. Kitts all at the same time. The reason it's been so clear is that we've had light north east winds which have kept the haze to the south of our islands. "Sarah Dust" also known as African Dust comes across the Atlantic every year blanketing the region in haze. Many people think incorrectly that the haze has something to do with Montserrat, but the world's most studied volcano, Soufriere, has nothing to do with it. What happens is that high winds blow massive quantities of dust from western and northern Africa up into the sky. Millions of tons a year of it comes across the Atlantic passing through the Caribbean traveling on the same trade winds that brought the original European settlers here. Since the early 1970s the mass and content of the dust has changed dramatically. Extreme droughts possibly to do with the "green house effect" as well as changing land and water use have resulted in more land losing its vegetation. Of course this results in more dust getting into the air, but that isn't the worst of it. Since the 1970's there has also been a change in the composition of the dust. There is now a variety of pollutants contained inside the dust and many scientists are now attributing much of the decline in our coral reefs to this increase in african dust. It’s quite logical actually because we all know that when coral is covered with silt of any kind in can die, so with african dust filled with pesticides and all the other nasties covering the coral each year, it’s not hard to make the connection. There are so many things killing it off that i think much of it is gone forever. Sadly, i remember when i was a teenager 19 years ago snorkeling on huge coral forests teaming with life. All of a sudden we had a few mega-hurricanes and most of the reef was gone. Many people blame the hurricanes, but the reef's decline wasn't just because of the storms.
It will take more time and study to find out all the negative effects of this increase in african dust, but there is at least one "positive" result. Using satellite imagery, NAOAA predicts when we in the Caribbean will get "african dust surges", and we know days in advance when it will be hazy.
They have done many studies on the effects of the dust on our weather and have concluded without a doubt that increased levels of the dust can hinder hurricane formation. Considering that due to "global warming" we are forecast to have more conducive conditions for extreme hurricane formation, it is also interesting that also due to global warming, the increase in dust helps to deter these storms from forming. The way it works is that the dust doesn’t come across the Atlantic in a constant stream and instead comes in big waves almost like weather fronts. If good hurricane forming conditions and the dust appear in the same area, then water droplets inside the clouds become too heavy when mixed with the dust and fall out of the sky before they get a chance to become huge thunderstorms. The dust kills the storms before they get a chance to turn into hurricanes.
Apart from all of this, the dust also makes a huge mess on clean surfaces including our boats! There is some great reading to be done on African dust, and of course there are many articles on the net about the health effects of the stuff too. For now we can be extra thankful that it's nice and clear out there. Enjoy it while it lasts.