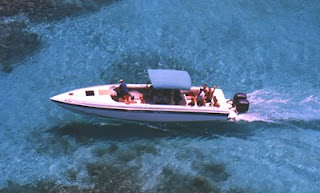 Up until November 2003 we were using a Wellcraft Scarab Super Sport to do our "North Sound Eco Historical Tour" as it was called in the early days. We started with a much smaller boat but fairly quickly moved to the Wellcraft which was a 34 foot center consol boat with two big outboards on the back. Even with a full boat we were not making any money and with engine problems now and then it just wasn't the right boat. As you know if you have read the history of AA blogs featured on the right side of this blog in the links section, you will know that another problem we had in 2002 is that we were too busy to keep the customers happy. 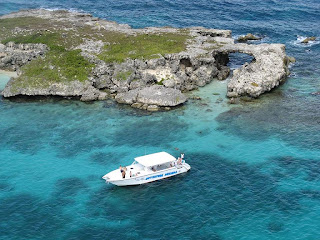 Anyway, in the end we found our Cooper Marine 52 foot tunnel hull which is also known as a power catamaran. The boat was one of two made so they didn't have much experience with the design. The engines were made by the Japanese company Yanmar and were high power and very light aluminum engines which as it turns out are not very durable for commercial use. The propulsion systems called stern drives are made by Mercruiser and are specially designed diesel units. As it turns out these also are not that durable for commercial use. So far we have spent somewhere in the region of about US $120,000 in new engines, drives, parts and labour over the past 5 years to keep the boat running. Apart from the huge financial cost there has been several other costs including environmental costs and mental health costs!!!!!! To see huge chunks of metal just thrown away because the stern drive or engine is not worth fixing has disgusted me. There were other environmental concerns as well. Since 2005 I have been constantly bothered by the nagging problem of what to do. Repowering a boat is a huge task and very expensive indeed. This October we are going to be making our final payment on the boat as it will have been five years since we got the loan for it and I think that it's now time to take another big step. We are going to completely change the way the boat is powered. We have dozens of options available to us at the moment. We have people from Yamaha working the numbers to see if we will get the right performance and we have people from Iveco Marine and Pulse Drive doing the same thing. I am going to be making my final decision within a few days. The boat will probably be out of commission for the month of October while we install the new engines and propulsion systems and the Eco Tour will be done using the Xtreme boat just for that month. Come the first of November we will be back in business with a newly designed boat. I am excited and will let you know more info soon.
Posted by 365 at 5:30 pm

Wishing you better luck going forward Eli. From all accounts you have an excellent product, so you certainly deserve to be successful in this age of shysters, amateurs and pretenders. Bravo.

Here's hoping the old adage is true: build a better mousetrap (outboard?) and the world will beat a path to your door.

See you in December.

Eli, which boat was Isis?

thanks guys! ISIS was the wellcraft seen in the top pic.

that's what I thought. Guess we missed the very first boat.

You can't get new engines, the guys will never get any holiday...